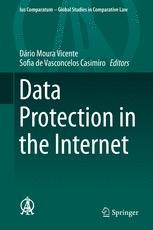 Data Protection in the Internet

This book identifies and explains the different national approaches to data protection – the legal regulation of the collection, storage, transmission and use of information concerning identified or identifiable individuals – and determines the extent to which they could be harmonised in the foreseeable future.

In recent years, data protection has become a major concern in many countries, as well as at supranational and international levels. In fact, the emergence of computing technologies that allow lower-cost processing of increasing amounts of information, associated with the advent and exponential use of the Internet and other communication networks and the widespread liberalization of the trans-border flow of information have enabled the large-scale collection and processing of personal data, not only for scientific or commercial uses, but also for political uses. A growing number of governmental and private organizations now possess and use data processing in order to determine, predict and influence individual behavior in all fields of human activity. This inevitably entails new risks, from the perspective of individual privacy, but also other fundamental rights, such as the right not to be discriminated against, fair competition between commercial enterprises and the proper functioning of democratic institutions.

These phenomena have not been ignored from a legal point of view: at the national, supranational and international levels, an increasing number of regulatory instruments – including the European Union’s General Data Protection Regulation applicable as of 25 May 2018 – have been adopted with the purpose of preventing personal data misuse. Nevertheless, distinct national approaches still prevail in this domain, notably those that separate the comprehensive and detailed protective rules adopted in Europe since the 1995 Directive on the processing of personal data from the more fragmented and liberal attitude of American courts and legislators in this respect. In a globalized world, in which personal data can instantly circulate and be used simultaneously in communications networks that are ubiquitous by nature, these different national and regional approaches are a major source of legal conflict.

Sofia de Vasconcelos Casimiro is an expert in ICT Law, including data protection and international law applicable to cyberspace. Sofia works in this area as a legal adviser, arbitrator and law scholar since the nineties. PhD in ICT and Intellectual Property Law, Queen Mary, University of London. Professor of Law at the University of Lisbon, School of Law, and at the Portuguese Military Academy. Gives courses in Law and cyberdefence at the NATO Communications and Information Systems School and at the European Security and Defence College. Scientific coordinator of ICT Law courses for NATO Multinational Cyber Defence Education and Training project (MNCDE&T). Co-founder of the Competitive Intelligence and Information Warfare Association. Director of the Portuguese Society for Intellectual Property Law.