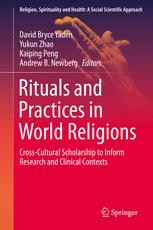 Rituals and Practices in World Religions

There is a need for a more inclusive collection of religious rituals and practices, as some practices are making headlines in contemporary society. Mindfulness is one of the fastest-growing psychological interventions in healthcare and Yoga is now practiced by tens of millions of people in the U.S.A. These practices have been examined in thousands of academic publications spanning neuroscience, psychology, medicine, sociology, and religious studies. While Mindfulness and Yoga have recently received widespread scientific and cultural attention, many rituals and practices from world religious traditions have remained underexplored in scholarly, scientific, and clinical contexts. This book brings more diverse rituals and practices into this academic discourse while providing a reference guide for clinicians and students of the topic.

David Bryce Yaden is a research fellow at The University of Pennsylvania’s Positive Psychology Center under the direction of Dr. Martin Seligman. He works in collaboration with neuroscientist Dr. Andrew Newberg of Thomas Jefferson University and The Center for Cognitive Neuroscience at The University of Pennsylvania. His work has been featured in The New York Times, The Wall Street Journal, NPR, Washington Post, and New York Magazine. David recently published a major academic collection, Being Called: Scientific, Secular, and Sacred Perspectives (Praeger, 2015). He has co-authored numerous scholarly papers with Dr. Andrew Newberg and Dr. Martin Seligman. Huffington Post recently named David one of ten Millennials influencing the future of faith and he was interviewed about his last book on NPR.

Yukun Zhao is a PhD candidate at Tsinghua University, China. His research focuses on self-determination theory, growth mindset, meaning, and big data. He also serves as the Administrative Director of the Positive Psychology Research Center of the School of Social Sciences of Tsinghua University, and Director of Research Center of Tsinghua Happiness Lab. He is the author of four books including Autonomous Parentingand Positivity in a Negative Era, and translated Martin Seligman’s Flourish, Mitchel Resnick’s Lifelong Kindergarten, and Alison Gopnick’s The Gardener and the Carpenter.

Kaiping Peng, PhD, is currently the dean of the school of social sciences, chair of the psychology department at Tsinghua University. Before returning to China in 2009, he was a tenured faculty member at the Department of Psychology of the University of California at Berkeley, the head of the social/personality psychology area in Berkeley, member of the American Psychological Association Leadership Council, executive committee of the Institute of East-Asian Studies at UC Berkeley. He a board member of the International Positive Psychology Association, and numerous other national and international professional academic services. He has published eight books and more than 300 articles and essays on cultural and social psychology, as well as methodological issues of psychology. According to many surveys, he had been the world most cited social psychologist at the associate professor level untill 2007, and one of the most cited Chinese psychologists in the world. His new book on positive psychology has been on the top ten best seller list on Amazon China.

Andrew B. Newberg, M.D. is currently the Director of Research at the Marcus Institute of Integrative Health at Thomas Jefferson University and Hospital in Philadelphia. He is also a Professor in the Department of Integrative Medicine and Nutritional Sciences at Thomas Jefferson University. He is the co-author of the books entitled, "The Rabbi's Brain", “Words Can Change Your Brain”, “How God Changes Your Brain”, "Why We Believe What We Believe", and “Why God Won’t Go Away: Brain Science and the Biology of Belief”. He is also the author of the books, "Neurotheology: How Science Enlightens Us About Spirituality", “The Metaphysical Mind: Probing the Biology of Philosophical Thought”, and “Principles of Neurotheology.”