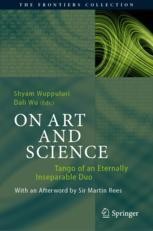 On Art and Science

Tango of an Eternally Inseparable Duo

Einstein once remarked "After a certain high level of technical skill is achieved, science and art tend to coalesce in aesthetics, plasticity, and form. The greatest scientists are always artists as well". In this volume, some of the world’s leading thinkers come together to expound on the interrelations between sciences and arts. While one can segregate art and place it outside the scientific realm, it is, nevertheless, inextricably linked to our essential cognitive/emotional/perceptual modalities and abilities, and therefore lies alongside and in close contact with the method of science and philosophy. What inspiration can scientists draw from art and how can scientific spirit foster our understanding and creation of aesthetic works? How are art and science grounded in our cognition? What role does perception play in science and art? Are criteria for beauty in art and science the same? How does evolution shape our understanding of art? How do science, art and scientifico-artistic frameworks shape society as a whole and help us address its pressing issues? The epistemological and ontological aspects haunt artists, philosophers and scientists alike. The essays in this volume address these manifold questions while also elucidating the pragmatic role they play in our daily life.

​Shyam Wuppuluri is an independent researcher working in the domain of foundations of science. His research interests range from philosophy to theoretical physics, mathematics and cognitive science. He is the recipient of Honra ao Mérito from the Brazilian Academy of Philosophy (Academia Brasileira de Filosofia) and has been a corresponding member of the academy since 2018. He is also the recipient of the prestigious Albert Einstein Fellowship 2020 from the Einstein Forum at Potsdam & Caputh and is a fellow of Royal Society of Arts. He is the instigating editor of several highly interdisciplinary volumes that disseminate and discuss issues underlying the foundations of sciences, and for which he has gathered the world's leading scientists and intellectuals as contributors; among them Noam Chomsky, Sir Roger Penrose, Sir Martin Rees, Daniel Dennett, A. C. Grayling, Nicholas Humphrey, Gregory Chaitin, Gerard 't Hooft, Ian Stewart, Barry Mazur, Stephen Wolfram, Paul Davies, Tyler Burge, Doron Swade, Julian Barbour, Newton Da Costa, Francisco Antonio Doria, Reuben Hersh, Nicholas Maxwell and many others.

Dali Wu is pursuing a doctorate in the “Study and practice of the Arts” at the University of Quebec in Montreal. She completed her masters degree in fine arts (M.F.A) from Haute école des arts du Rhin, France. Her focus has always been on the interdisciplinary aspects of art and their relation to the human condition and reality at large. She also focuses on the psychologico-cognitive aspects of the Digital Art. She combines visual art with tangible models and installations, to situate and simulate the real-world complexity from an (phenomenological) artistic angle, and regularly collaborates with artists, musicians and scientists in this context. Apart from the various international awards that she has received, she has presented her art work in a number of exhibitions, art festivals and public spaces and published papers in influential academic journals. She writes a column introducing international art institutions in the academic monthly “Fine Arts in China”.