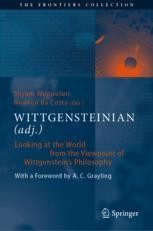 Looking at the World from the Viewpoint of Wittgenstein's Philosophy

“Tell me," Wittgenstein once asked a friend, "why do people always say, it was natural for man to assume that the sun went round the earth rather than that the earth was rotating?" His friend replied, "Well, obviously because it just looks as though the Sun is going round the Earth." Wittgenstein replied, "Well, what would it have looked like if it had looked as though the Earth was rotating?”

What would it have looked like if we looked at all sciences from the viewpoint of Wittgenstein’s philosophy? Wittgenstein is undoubtedly one of the most influential philosophers of the twentieth century. His complex body of work has been analysed by numerous scholars, from mathematicians and physicists, to philosophers, linguists, and beyond. This volume brings together some of his central perspectives as applied to the modern sciences and studies the influence they may have on the thought processes underlying science and on the world view it engenders. The contributions stem from leading scholars in philosophy, mathematics, physics, economics, psychology and human sciences; all of them have written in an accessible style that demands little specialist knowledge, whilst clearly portraying and discussing the deep issues at hand.

Shyam Wuppuluri is an independent researcher working in the domain of foundations of science. His research interests range from philosophy to theoretical physics, mathematics and cognitive science. He is the recipient of Honra ao Mérito from the Brazilian Academy of Philosophy (Academia Brasileira de Filosofia) and has been a corresponding member of the academy since 2018. He is also the recipient of the prestigious Albert Einstein Fellowship 2020 from the Einstein Forum at Potsdam & Caputh and is a fellow of Royal Society of Arts. He is the instigating editor of several highly interdisciplinary volumes that disseminate and discuss issues underlying the foundations of sciences, and for which he has gathered the world's leading scientists and intellectuals as contributors; among them Noam Chomsky, Sir Roger Penrose, Sir Martin Rees, Daniel Dennett, A. C. Grayling, Nicholas Humphrey, Gregory Chaitin, Gerard 't Hooft, Ian Stewart, Barry Mazur, Stephen Wolfram, Paul Davies, Tyler Burge, Doron Swade, Julian Barbour, Newton Da Costa, Francisco Antonio Doria, Reuben Hersh, Nicholas Maxwell and many others.

Newton da Costa is a Brazilian logician whose best known contributions have been in the realm of nonclassical logics. Da Costa developed paraconsistent logics, that is, logical systems that admit inner contradictions. Da Costa has wide-ranging interests, which go from foundational issues in the philosophy of science to physics (general relativity and quantum theory); besides his development of paraconsistent logics, he introduced the concept of quasi-truth to deal with mutually inconsistent scientific theories. Da Costa has a B. Sc. in civil engineering and a PhD in mathematics. He has visited several major universities (Stanford, Berkeley, Paris VII among others) and published about 200 scientific papers and several books on logic and the foundations of science. In 2009, he became a Professor Emeritus at Unicamp (Campinas, Brazil). Newton da Costa  is a member of the Institut International de Philosophie, of the International Academy of the Philosophy of Science and of the Brazilian Academy of Philosophy.