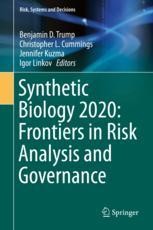 Synthetic biology offers powerful remedies for some of the world’s most intractable problems, but these solutions are clouded by uncertainty and risk that few strategies are available to address. The incentives for continued development of this emerging technology are prodigious and obvious, and the public deserves assurances that all potential downsides are duly considered and minimized accordingly. Incorporating social science analysis within the innovation process may impose constraints, but its simultaneous support in making the end products more acceptable to society at large should be considered a worthy trade-off.

Contributing authors in this volume represent diverse perspectives related to synthetic biology’s social sciences, and reflect on different areas of risk analysis and governance that have developed for the field.  Such perspectives include leading scholarly discussion pertaining to risk assessment, governance, ethics, and communication. The chapters of this volume note that while the first twenty years of synthetic biology development have focused strongly on technological innovation and product development, the next twenty should emphasize the synergy between developers, policymakers, and publics to generate the most beneficial, well governed, and transparent technologies and products possible.Many chapters in this volume provide new data and approaches that demonstrate the feasibility for multi-stakeholder efforts involving policymakers, regulators, industrial developers, workers, experts, and societal representatives to share responsibilities in the production of effective and acceptable governance in the face of uncertain risk probabilities. A full consideration of such perspectives may prevent a world of draconian regulations based on an insufficient or incomplete understanding of the science that underpins synthetic biology, as well as any hesitancy or fear by the public to adopt its eventual products.
Show all
About the authors