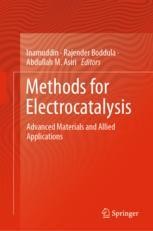 This book explores key parameters, properties and fundamental concepts of electrocatalysis. It also discusses the engineering strategies, current applications in fuel-cells, water-splitting, metal-ion batteries, and fuel generation. This book elucidates entire category viewpoints together with industrial applications. Therefore, all the sections of this book emphasize the recent advances of different types of electrocatalysts, current challenges, and state-of-the-art studies through detailed reviews. This book is the result of commitments by numerous experts in the field from various backgrounds and expertise and appeals to industrialists, researchers, scientists and in addition understudies from various teaches.

Dr. Inamuddin is an Assistant Professor in the Department of Applied Chemistry, Aligarh Muslim University (AMU), Aligarh, India. He has extensive research experience in multidisciplinary fields of Analytical Chemistry, Materials Chemistry, and Electrochemistry and, more specifically, Renewable Energy and Environment. He is a life member of the Journal of the Indian Chemical Society. His research interest includes ion exchange materials, sensor for heavy metal ions, biofuel cells, supercapacitors and bending actuators.

Prof. Abdullah M. Asiri is the Head of the Chemistry Department at King Abdulaziz University since October 2009 and he is the founder and the Director of the Center of Excellence for Advanced Materials Research (CEAMR) since 2010 till now. He is a Professor of Organic Photochemistry. Prof. Asiri is involved in many committees at the KAU level and also on the national level, he took a major roll in the Advanced materials committee working for KACST to identify the National plan for science and technology in 2007. Prof. Asiri played a major role in advancing the chemistry education and research in KAU, he has been awarded the best Researchers from KAU for the past five years. He also awarded the Young Scientist award from the Saudi Chemical society in 2009, and also the first prize for the distinction in science from the Saudi chemical society in 2012. He also received a recognition certificate from the American Chemical society (Gulf region Chapter) for the advancement of chemical science in the Kingdome. Also he received a Scopus certificate for the most Publishing Scientist in Saudi Arabia in chemistry in 2008. He is also a member of the Editorial Board of Pigments and Resin Technology (UK), Organic Chemistry in Sight (New Zealand), Designed Monomers & Polymers and Journal of Single Molecule Research . He is the Vice- President of Saudi Chemical Society (Western Province Branch).