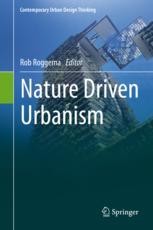 This book discusses the way that a nature-driven approach to urbanism can be applied at each of the urban scales; architectural design, urban design of neighborhoods, city planning and landscape architecture, and at the city and regional scales. At all levels nature-driven approaches to design and planning add to the quality of the built structure and furthermore to the quality of life experienced by people living in these environments. To include nature and greening to built structures is a good starting point and can add much value. The chapter authors have fiducia in giving nature a fundamental role as an integrated network in city design, or to make nature the entrance point of the design process, and base the design on the needs and qualities of nature itself. The highest existence of nature is a permanent ecosystem which endures stressors and circumstances for a prolonged period. In an urban context this is not always possible and temporality is an interesting concept explored when nature is not a permanent feature. The ecological contribution to the environment, and indirect dispersion of species, from a temporary location will, overall add biodiversity to the entire system.

Prof. Dr. ir. Rob Roggema is Professor Spatial Transformations in the Research Centre for the Built Environment ‘NoorderRuimte’, Hanze University of Applied Sciences in Groningen, the Netherlands. He is Landscape Architect and an international design expert in the field of sustainable urbanism, climate adaptation, energy landscapes and urban agriculture. He held positions at several universities in the Netherlands and Australia, provinces and municipalities, and design firms.

Rob developed the Swarm Planning concept, a dynamic way to design the city, to prepare it for future climate change. Rob’s research focuses on the reciprocal city, investigating resilience, adaptation and circularity in urban design. Recent design concepts Rob has conceived are the Double Defence, a proposition for a second row of barrier islands, protecting the Dutch coast against storm surges; the Floodable Landscape for a region under threat of flooding; Bushfire Resilient Bendigo, in which the design anticipates bushfires through creating a protective shield and slowly moving the town away from the fire; the FoodRoofRio, a roof garden with an aquaponic system growing food for the entire family in ‘Cantagalo’ favela, Rio de Janeiro; and the Sydney Barrier Reef, a refuge for nature fleeing the Great Barrier Reef, which is at risk of disappearing as result of bleeching and simultaneously protects the highly valued real estate of the Sydney coast against future cyclones.
Rob has facilitated and designed over 30 design charrettes across the globe in which citizens, academics, governments and industries are indulged in the design process of complex spatial problems. He has written three books about climate adaptation and design, four about urban agriculture and one about design charrettes. Furthermore, he wrote books about the FoodRoofRio and Design after Tsunami in Japan. He is series editor of the book series ‘Contemporary Urban Design Thinking’ and editor in chief of the journal ‘Smart and Sustainable Built Environments (SASBE)’.