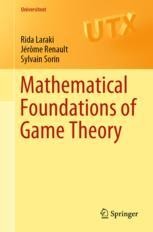 This book gives a concise presentation of the mathematical foundations of Game Theory, with an emphasis on strategic analysis linked to information and dynamics. It is largely self-contained, with all of the key tools and concepts defined in the text.

Combining the basics of Game Theory, such as value existence theorems in zero-sum games and equilibrium existence theorems for non-zero-sum games, with a selection of important and more recent topics such as the equilibrium manifold and learning dynamics, the book quickly takes the reader close to the state of the art. Applications to economics, biology, and learning are included, and the exercises, which often contain noteworthy results, provide an important complement to the text.

Based on lectures given in Paris over several years, this textbook will be useful for rigorous, up-to-date courses on the subject. Apart from an interest in strategic thinking and a taste for mathematical formalism, the only prerequisite for reading the book is a solid knowledge of mathematics at the undergraduate level, including basic analysis, linear algebra, and probability.

Rida Laraki graduated from the École Polytechnique (Paris, France) in 1996 and did his PhD in mathematical game theory at the UPMC (University Pierre and Marie Curie). Since 2001, he is a researcher at the CNRS, affiliated with Lamsade (the computer science department of the University of Paris Dauphine-PSL). Since 2017, he is also a professor at the University of Liverpool (in the computer science department). He is responsible of the doctoral program in computer science at the University of Paris Dauphine, and was responsible of the french scientific society on the mathematics of optimization and decision: SMAI-MODE. He taught mathematical game theory over multiple years at several Grandes Écoles and Universities in France including École Polytechnique, ENSAE, ENSTA, ENS and UPMC. He is known for majority judgment, a new voting method based on game theory. His book with Michel Balinski on the subject was published by the MIT Press in 2011.
Jérôme Renault graduated in 1994 from ENSAE Paris and Université Paris 7 and received his PhD in 1998 from Cermsem, Université Paris 1 Panthéon-Sorbonne. He has been Maître de Conférences at Ceremade, Université Paris-Dauphine, held a game theory chair at École Polytechnique, and is since 2009 a math professor at Toulouse School of Economics, Université Toulouse 1 Capitole. He has been the head of the CNRS research group in Game Theory from 2012 to 2015, and has recently obtained a chair Game Theory and Artifical Intelligence within the new Toulouse institute ANITI. He contributes in particular to the theory of repeated games, stochastic games, games with signals, long-term dynamic programming, Markov decision processes and optimal control, strategic transmission of information and games with incomplete information.
Sylvain Sorin graduated in 1976 from the École Normale Supérieure de Saint Cloud and received his Doctorat d'État in 1981 from UPMC-Paris VI. He has been professor at Université L. Pasteur (Strasbourg ; 1985-1990), Université Paris X-Nanterre (1990-2000), and is currently at UPMC-Paris VI (now Sorbonne Université). He has given game theory courses in several institutions in France (ENA, ENSAE, École Polytechnique, …) and was invited professor on several occasions, including at IMSSS (Stanford), Core (Louvain), IAS (Jerusalem), MSRI (Berkeley), IDS (Stony Brook), CRIDT (Jerusalem), IMPA (Rio), CMM (Santiago), CRM (Barcelona), and HIM (Bonn). His contributions include: supergames, stochastic  and incomplete information games, merging and reputation, approachability, learning algorithms, stochastic approximation and game dynamics… He has been editor in chief of the International Journal of Game Theory and area editor for game theory for the journal Mathematics of Operations Research. He is a fellow of the Game Theory Society and of the Econometric Society. He gave the von Neumann lecture at the congress of the GTS (Maastricht, 2016). He is the co-author, with J.-F. Mertens and S. Zamir, of the book Repeated Games, Cambridge U.P. (2015).

“The book is a very valuable one and a nice piece of work in the area of game theory. … The book is enjoyable to read and truly an enrichment in game theory. It is widely well-structured and well-written and mathematically correct. … I recommend the book for researchers, graduate and undergraduate students who wants to get some insight in noncooperative game theory.” (Sirma Zeynep Alparslan-Gok, zbMATH 1426.91002, 2020)