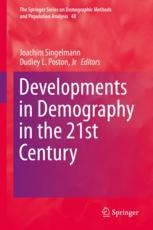 Developments in Demography in the 21st Century

This book introduces demographic applications which employ current demographic concepts and theories and cutting-edge methods and findings, all of which have and will continue to have an impact in the broad area of social demography. Through providing an introduction to new and current developments in demography, methodological and statistical issues, data issues, issues of health, aging and mortality, and issues in social demography, this book gives new insights into data, substantive issues, and methodological approaches that will assist readers in their use of demography in their research. At the same time it shows demographers, sociologists, economists, statisticians, methodologists, planners, and marketers how they may learn and improve upon the quality and relevance of their demographic investigations now and in the future.

Joachim Singelmann is the Dean’s Distinguished Professor of Public Policy in the Department of Demography at the University of Texas at San Antonio. His previous positions were at Louisiana State University, United Nations Population Division, University of California-San Diego, and Vanderbilt University. He obtained his M.A. and Ph.D. degrees at the University of Texas at Austin. Singelmann’s research areas include industrial restructuring, transitions from central planning to market economies, demographic development, sociodemographic consequences of disasters, and inequality and poverty. His research has been funded by several foundations including NSF and the U.S. Departments of Labor, Health and Human Services, the Interior, and Agriculture. Singelmann is the author of many books and his research has been published in the major social science journals in the United States and Europe, including Demography, American Journal of Sociology, European Sociological Review, British Journal of Sociology, Social Forces, Rural Sociology, and Demographic Research. Singelmann has been the editor of Rural Sociology and President of the Southern Demographic Association and the Rural Sociological Society.