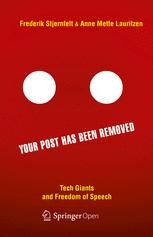 Tech Giants and Freedom of Speech

This open access monograph argues established democratic norms for freedom of expression should be implemented on the internet. Moderating policies of tech companies as Facebook, Twitter and Google have resulted in posts being removed on an industrial scale. While this moderation is often encouraged by governments - on the pretext that terrorism, bullying, pornography, “hate speech” and “fake news” will slowly disappear from the internet - it enables tech companies to censure our society. It is the social media companies who define what is blacklisted in their community standards. And given the dominance of social media in our information society, we run the risk of outsourcing the definition of our principles for discussion in the public domain to private companies. Instead of leaving it to social media companies only to take action, the authors argue democratic institutions should take an active role in moderating criminal content on the internet. To make this possible, tech companies should be analyzed whether they are approaching a monopoly. Antitrust legislation should be applied to bring those monopolies within democratic governmental oversight.

Despite being in different stages in their lives, Anne Mette is in the startup phase of her research career, while Frederik is one of the most prolific philosophers in Denmark, the authors found each other in their concern about Free Speech on the internet.

"From my perspective both as a politician and as private book collector, this is the most important non-fiction book of the 21st Century. It should be disseminated to all European citizens. The learnings of this book and the use we make of them today are crucial for every man, woman and child on earth. Now and in the future.”

Jens Rohde, member of the European Parliament for the Alliance of Liberals and Democrats for Europe

“This timely book compellingly presents an impressive array of information and analysis about the urgent threats the tech giants pose to the robust freedom of speech and access to information that are essential for individual liberty and democratic self-government.   It constructively explores potential strategies for restoring individual control over information flows to and about us.  Policymakers worldwide should take heed!”

Nadine Strossen, Professor, New York Law School. Author, HATE:  Why We Should Resist It with Free Speech, Not Censorship

Anne Mette Lauritzen is a researcher at the Center for Information and Bubble Studies (CIBS) at the University of Copenhagen and is finalizing her Master’s Degree in Philosophy. Her research interests include intellectual history, human rights and the philosophy of technology.

Frederik Stjernfelt is a full professor of semiotics, intellectual history, and philosophy of science at Aalborg University Copenhagen. His interests also include Peirce studies, political philosophy, freedom of expression. He is a member of the Royal Danish Society of Sciences and Letters and has published, inter alia, his habilitation Diagrammatology: An Investigation on the Borderlines of Phenomenology, Ontology, and Semiotics (Springer 2007).