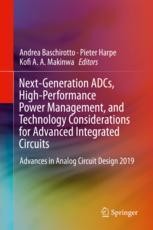 This book is based on the 18 tutorials presented during the 28th workshop on Advances in Analog Circuit Design.  Expert designers present readers with information about a variety of topics at the frontier of analog circuit design, including next-generation analog-to-digital converters , high-performance power management systems and technology considerations for advanced IC design. For anyone involved in analog circuit research and development, this book will be a valuable summary of the state-of-the-art in these areas.

Pieter Harpe received the M.Sc. and Ph.D. degrees from the Eindhoven University of Technology, The Netherlands. In 2008, he started as researcher at Holst Centre / imec, The Netherlands. Since then, he has been working on ultra-low-power wireless transceivers, with a main focus on ADC research and design. In April 2011, he joined Eindhoven University of Technology, where he is currently an associate professor on low-power mixed-signal circuits. He is co-organizer of the yearly workshop on Advances in Analog Circuit Design (AACD) and Technical Program Committee member for ESSCIRC. He also served as International Technical Program Committee member for the ISSCC and as IEEE Solid-State Circuits Society Distinguished Lecturer. He is a recipient of the ISSCC 2015 Distinguished Technical Paper Award.

Kofi Makinwa holds degrees from Obafemi Awolowo University, Ile-Ife (B.Sc., M.Sc.), the Philips International Institute, Eindhoven (M.E.E.), and Delft University of Technology, Delft (Ph.D.). From 1989 to 1999, he was a Research Scientist with Philips Research Laboratories, Eindhoven, The Netherlands, where he worked on interactive displays and digital recording systems. In 1999, he joined the Delft University of Technology, where he is an Antoni van Leeuwenhoek Professor and Head of the Microelectronics Department. His research interests include the design of mixed-signal circuits, sensor interfaces and smart sensors. Dr. Makinwa chairs the Analog Subcommittee of the International Solid-State Circuits Conference (ISSCC), and is also on the program committees of the VLSI Symposium, the European Solid-State Circuits Conference (ESSCIRC), and the Advances in Analog Circuit Design (AACD) workshop. He has co-authored or edited 15 books, over 250 technical papers, and holds 30 patents. This has resulted in 15 best paper awards from the JSSC, ISSCC, VLSI, ESSCIRC and Transducers, among others. At the 60th anniversary of ISSCC, he was recognized as one of its top-10 contributors. He is an IEEE Fellow, a member of the Royal Netherlands Academy of Arts and Sciences (KNAW), a member of the editorial board of the Proceedings of the IEEE and an elected member of the AdCom of the IEEE Solid-State Circuits Society.