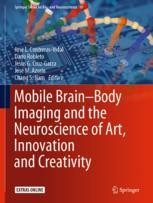 Mobile Brain-Body Imaging and the Neuroscience of Art, Innovation and Creativity

Mobile Brain–Body Imaging and the Neuroscience of Art, Innovation and Creativity is a trans-disciplinary, collective, multimedia collaboration that critically uncovers the challenges and opportunities for transformational and innovative research and performance at the nexus of art, science and engineering.

This book addresses a set of universal and timeless questions with a profound impact on the human condition:

Emerging from the 2016 and 2017 International Conferences on Mobile Brain–Body Imaging and the Neuroscience of Art, Innovation and Creativity held in Cancun, Mexico and Valencia, Spain to explore these topics, this book intertwines disciplines and investigates not only their individual products—art and data—but also something more substantive and unique; the international pool of contributors reveals something larger about humanity by revealing the state of the art in collaboration between arts and sciences and providing an investigational roadmap projected from recent advances.

Mobile Brain–Body Imaging and the Neuroscience of Art, Innovation and Creativity is written for academic researchers, professionals working in industrial and clinical centers, independent researchers and artists from the performing arts, and other readers interested in understanding emergent innovations at the nexus of art, science, engineering, medicine and the humanities. The book contains language, design features (illustrations, diagrams) to develop a conversational bridge between the disciplines involved supplemented by access to video, artistic presentations and the results of a hackathon from the MoBI conferences.

Dr. Jose L. Contreras-Vidal is the Hugh Roy and Lillie Cranz Cullen Distinguished Professor of Electrical & Computer Engineering, Site Director for the National Science Foundation Industry-University Collaborative Research Center on Building Reliable Advances and Innovations in Neurotechnologies (IUCRC BRAIN), and Director of the Laboratory for Noninvasive Brain-Machine Interface Systems at the University of Houston. He is also a Full Affiliate in the Department of Neurosurgery at the Houston Methodist Hospital and a Distinguished Visiting Professor at the Tecnologico de Monterrey, Mexico.Dr. Contreras-Vidal’s research focuses on neural, cognitive and rehabilitation engineering, and the design of noninvasive brain-machine interfaces (BMI) and wearable and therapeutical robotics to restore, augment or assist whole body movement after physical injury or neurological conditions. His laboratory has pioneered the development of noninvasive BMI systems based on scalp EEG to control motorized exoskeletons and robotic prosthetic limbs to restore motor function in individuals with spinal cord injury, stroke and limb amputation. His team has also developed experimental and computational approaches to acquire brain activity in ‘action and in context’ in complex real settings using context-aware mobile brain-body imaging (MoBI) technology to study aesthetics, creativity and innovation. Dr. Contreras-Vidal has pioneered the concept of “The Museum as a Public Laboratory” to understand brain dynamics in freely behaving individuals. Dr. Contreras-Vidal’s research has been supported by the National Institutes of Health, the National Science Foundation, the VA, ONR, the Cullen Foundation, Mission Connect - TIRR Foundation, and industry. He is in the editorial board of IEEE Human-Machine Systems, International Journal Mobile Human Computer Interaction, Frontiers in Neuroprosthetics, Applied Bionics and Biomechanics, Brain Computer Interfaces, and was a Guest Editor of an Special Issue on Mobile Brain-Body Imaging and the Neuroscience of Art, Creativity and Innovation in the journal Frontiers in Human Neuroscience. He was Chair/Co-Chair of the 2016/2017 International Conferences on Mobile Brain-Body Imaging and the Neuroscience of Art, Creativity and Innovation. Dr. Contreras-Vidal’s research has reached specialized audiences and the general public through news and views reports published and/or highlighted by The Economist, Nature, Science News, Der Spiegel, National Science Foundation, Wall Street Journal, the Society for Neuroscience, O&P, Science, Nature, Scientific American, NPR’s Science Friday, and Neurology Today among others. His career development in biomedical engineering has been highlighted in the magazine Science.

Dario Robleto received his BFA from the University of Texas at San Antonio in 1997. The Houston-based artist has had numerous solo exhibitions since 1997, most recently at the Menil Collection, Houston, TX (2014); the Baltimore Museum of Art (2014); the New Orleans Museum of Art (2012); and the Museum of Contemporary Art, Denver (2011). His work has been profiled in numerous publications and media including Radiolab, Krista Tippet's On Being, and the New York Times. In 2008 a 10-year survey exhibition, Alloy of Love, was organized by the Frances Young Tang Teaching Museum and Art Gallery at Skidmore College, Saratoga Springs, New York. Accompanied by a major monograph, Alloy of Love traveled to the Frye Art Museum in Seattle, Washington.

Robleto has been a visiting artist and lecturer at many universities and institutions including Bard College, Annandale-on-Hudson, NY; Massachusetts Institute of Technology, Cambridge, MA; Rhode Island School of Design, Providence, RI; and the Hubble Space Telescope Science Institute, Baltimore, MD. In 2013-14 he served as the California College of the Arts Viola Frey Distinguished Visiting Professor, Oakland, CA.

His awards have included the International Association of Art Critics Award for best exhibition in a commercial gallery at the national level (2004) and recipient of both the Joan Mitchell Foundation Grant (2007) and the USA Rasmuson Fellowship (2009). He has been a research fellow and artist in resident at institutions such as the Menil Collection (2014); the Cynthia Woods Mitchell Center for the Arts (2014); Rice University (2013-14); the Smithsonian Museum of American History (2011); the SETI Institute (2016-17); and the Robert Rauschenberg Foundation (2017). In 2016 and 2017 he was a co-organizer of the International Conference on Mobile Brain-Body Imaging and the Neuroscience of Art, Innovation, and Creativity in Cancun, Mexico and Valencia, Spain.

In 2015 he joined a distinguished team of scientists as the artistic consultant to “Breakthrough Message”—a multi-national effort that aims to encourage intellectual and technical debate about how and what to communicate if the current search for intelligent beings beyond Earth is successful. He is currently serving as an Artist-in-Residence in Neuroaesthetics at the University of Houston’s Cullen College of Engineering and as Artist-at-Large at Northwestern University's McCormick School of Engineering and the Block Museum of Art. In 2016 he was appointed as the Texas State Artist Laureate. He is a former board member of Artpace, San Antonio and a current board member of the Nasher Museum of Art at Duke University.

Jesus G. Cruz-Garza is a PhD candidate at the University of Houston, in the department of Electrical and Computer Engineering. He is the recipient of the University of Houston - Houstom Methodist Research Institute Graduate Fellowship for Translational Neuroscience, in which he developed methods for data collection and analysis in real world settings to explore the human creative process using mobile brain-body imaging systems. He was the designated student leader for documentation and compilation of information from the 2017 International Conference on Mobile Brain-Body Imaging and the Neuroscience of Art, Innovation and Creativity held in Valencia, Spain. Jesus is the President of the IEEE Houston BRAIN Group.

Dr. José M. Azorín is the Director of the Brain-Machine Interface Systems Lab and Professor of the Systems Engineering and Automation Department at Miguel Hernández University of Elche (Spain). He holds a M.Sc in Computer Science from the University of Alicante (1997, Spain) and a Ph.D. in Robotics (Award for the Best Thesis of the Department) by the UMH (2003, Spain). He has been a visiting researcher at the University of Houston, USA (Fulbright grant), at Imperial College London (United Kingdom) and at INRIA - Sophia Antipolis (France). His current research interests are Brain-Machine Interfaces, Neuro-robotics and Rehabilitation Robotics. Over the last  years, his research has been funded by prestigious grants from the European Union and other Spanish government agencies. He has been the PI of more than 10 research projects, and his research has resulted in more than 150 technical papers and 3 patents. He was the Chair of the 2017 International Conference on Mobile Brain-Body Imaging and the Neuroscience of Art, Innovation and Creativity. Currently, he is a Distinguished Lecturer of the IEEE Systems Council. Dr. Chang S. Nam is currently a professor of Edward P. Fitts Industrial and Systems Engineering at North Carolina State University, USA. He is also an associated professor of the UNC/NCSU Joint Department of Biomedical Engineering as well as Department of Psychology. He received a PhD from the Grado Department of Industrial and Systems Engineering at Virginia Tech in 2003. He teaches and conducts basic and applied research in human factors and ergonomics engineering to advance the science of Human-Computer Interaction (HCI) with a broad prospective on the application of systems and information engineering to human-centered technologies, including brain-computer interface and neurorehabilitation, wearable sensor-based remote healthcare, neuroergonomics, and adaptive and intelligent human-computer interaction. His research has been supported by federal agencies including National Science Foundation (NSF), Air Force Research Laboratory (AFRL) and National Security Agency (NSA). Dr. Nam has received the NSF CAREER Award (2010), Outstanding Researcher Award (2010-2011), and Best Teacher Award (2010-2011). Currently, Nam serves as the Editor-in-Chief of the journal Brain-Computer Interfaces.
Show all