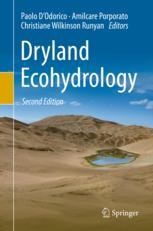 By combining the analysis of biotic and abiotic components of terrestrial ecosystems, this book synthesizes material on arid and semiarid landscapes, which was previously scattered among various books and journal articles. It focuses on water-limited ecosystems, which are highly sensitive to fluctuations in hydrologic conditions and, in turn, play an important role in affecting the regional water cycle.

Intended as a tool for scientists working in the area of the earth and environmental sciences, this book presents the basic principles of eco-hydrology as well as a broad spectrum of topics and advances in this research field. Written by authors with diverse areas of expertise who work in arid areas around the world, the contributions describe the various interactions between the biological and physical dynamics in dryland ecosystems, ranging from basic processes in the soil-vegetation-climate system, to landscape-scale hydrologic and geomorphic processes, ecohydrologic controls on soil nutrient dynamics, and multiscale analyses of disturbances and patterns

Paolo D’Odorico received his Ph.D. from the University of Padua. He is a Professor of Hydrology at the University of California, Berkeley. His is currently investigating the role of hydrological processes in the functioning of terrestrial ecosystems and societies, with a focus on ecohydrological feedback, ecosystem stability, desertification, and water use for food and energy production. He is the author of more than 200 peer-reviewed research papers, and co-author of “Noise-Induced Phenomena in the Environmental Sciences” (2011, Cambridge University Press), “Elements of Physical Hydrology, Second Edition” (2014, Johns Hopkins University Press), and “Global Deforestation” (2016, Cambridge University Press).

Christiane Runyan received her PhD in Environmental Science, with a focus on Hydrology, from the University of Virginia in 2013. Currently, she teaches Hydrology and Water Resources as well as Global Land Use Change at Johns Hopkins University. Her research focuses on how deforestation affects hydrological and biogeochemical processes. In 2016, she published a book on the issues surrounding deforestation entitled 'Global Deforestation' (2016, Cambridge University Press).

Amilcare Porporato holds a PhD from the Polytechnic of Turin and is currently the Thomas J Wu ’94 Professor of Civil and Environmental Engineering at Princeton University’s Environmental Institute. His research interests include nonlinear and stochastic dynamical systems, land-atmosphere interaction, ecohydrology and biogeochemistry, sustainability and water resources and environmental thermodynamics.  He is the author of more than 200 peer-reviewed research papers and co-author of the book "Ecohydrology of water controlled ecosystems" (Cambridge University Press).