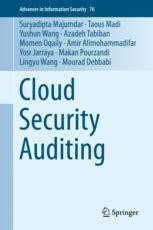 This book provides a comprehensive review of the most up to date research related to cloud security auditing and discusses auditing the cloud infrastructure from the structural point of view, while focusing on virtualization-related security properties and consistency between multiple control layers. It presents an off-line automated framework for auditing consistent isolation between virtual networks in OpenStack-managed cloud spanning over overlay and layer 2 by considering both cloud layers’ views. A runtime security auditing framework for the cloud with special focus on the user-level including common access control and authentication mechanisms e.g., RBAC, ABAC and SSO is covered as well.
This book also discusses a learning-based proactive security auditing system, which extracts probabilistic dependencies between runtime events and applies such dependencies to proactively audit and prevent security violations resulting from critical events. Finally, this book elaborates the design and implementation of a middleware as a pluggable interface to OpenStack for intercepting and verifying the legitimacy of user requests at runtime.
Many companies nowadays leverage cloud services for conducting major business operations (e.g., Web service, inventory management, customer service, etc.). However, the fear of losing control and governance still persists due to the inherent lack of transparency and trust in clouds. The complex design and implementation of cloud infrastructures may cause numerous vulnerabilities and misconfigurations, while the unique properties of clouds (elastic, self-service, multi-tenancy) can bring novel security challenges. In this book, the authors discuss how state-of-the-art security auditing solutions may help increase cloud tenants’ trust in the service providers by providing assurance on the compliance with the applicable laws, regulations, policies, and standards. This book introduces the latest research results on both traditional retroactive auditing and novel (runtime and proactive) auditing techniques to serve different stakeholders in the cloud. This book covers security threats from different cloud abstraction levels and discusses a wide-range of security properties related to cloud-specific standards (e.g., Cloud Control Matrix (CCM) and ISO 27017). It also elaborates on the integration of security auditing solutions into real world cloud management platforms (e.g., OpenStack, Amazon AWS and Google GCP).
This book targets industrial scientists, who are working on cloud or security-related topics, as well as security practitioners, administrators, cloud providers and operators.Researchers and advanced-level students studying and working in computer science, practically in cloud security will also be interested in this book.