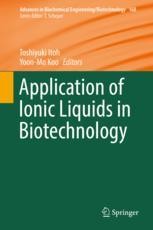 Application of Ionic Liquids in Biotechnology

This volume explores how ionic liquids are used in different areas of biotechnology. It also provides insights on the interaction of ionic liquids with biomolecules and biomaterials.

Ionic liquids have become essential players in the fields of synthesis, catalysis, extraction and electrochemistry, and their unique properties have opened a wide range of applications in biotechnology. Readers will discover diverse examples of the application of ionic liquids as solvents for biomaterials extraction and pretreatment, in enzymatic and whole cell catalysed reaction, and as activation agents for biocatalysis. Particular attention is given to the biologically functionalized ionic liquids employed in medical and pharmaceutical applications. Although ionic liquids are considered “green solvents”, the contributing authors will also explore their environmental impact when applied to biotechnology.

Chemical, biological and medical scientists interested in ionic liquids and biotechnology will find this work instructive and informative.

Yoon-Mo Koo received his Ph.D. in chemical engineering, Purdue University in 1985 after the M.S. in chemical engineering, KAIST in 1977 and the B.S. in chemical engineering, Seoul National University in 1975. He is serving as a professor in biological engineering, Inha University since 1987. His research topics in ionic liquids are mostly related with biotechnology, including microbial biotransformation, enzymatic bioconversion and product recovery, molecular simulation of enzyme in ionic liquids, protein folding/refolding in ionic liquids, cellulose dissolution and molecular design of functional ionic liquids. He has organized several professional meetings, including the 15th IBS (International Biotechnology Symposium, 2012), COIL-6 (International Congress on Ionic Liquids, 2015). He served as the President for the KSBB (Korean Society of Biotechnology and Bioengineering, 2007), the Dean of College of Engineering (2007-2008) and Graduate School (2017-2018), Inha University, the Secretary General of the AFOB (Asian Federation of Biotechnology, 2016-2018) and is currently a Member of the NAEK (National Academy of Engineering, Korea).
Toshiyuki Itoh graduated at Tokyo University of Education in 1976. After working as a chemistry teacher in high schools in his hometown in Mie prefecture, he decided to go back to the University and received his Ph.D. degree in 1986 from the University of Tokyo. He was appointed Assistant Professor at the Okayama University in 1987, then promoted to Associate Professor in 1990. He worked with Professor Anthony G. M. Barrett as a visiting scholar at Colorado State University in 1990-1991 and moved to Tottori University in 2002, where he was promoted to full Professor in 2004 and is now director of the Center for Research on Green Sustainable Chemistry. He is recipient of the Society of Synthetic Organic Chemistry Japan Award (2010), and the Green and Sustainable Chemistry Award Japan (2009). He served as President of the Society of Fluorine Chemistry, Japan (2013-2015), and has been the representative of the managing committee of the Ionic Liquids Research Association, Japan, since 2014. He is serving as director of the Chemical Society of Japan since 2016.