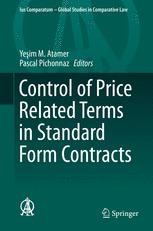 This book explores various approaches around the world regarding price term control, and particularly discusses the effectiveness of two major paths: ex ante regulatory and ex post judicial intervention. Price control and its limits are issues that affect all liberal market economies, as well as more regulated markets.

For the past several years, courts in many different countries have been confronted with the issue of whether, and to what extent, they should intervene regarding price-related terms in standard form contracts – especially in the area of consumer contracts. Open price clauses, flat remunerations, price adjustment clauses, clauses giving the seller/supplier the right to ask for additional payments, bundling or partitioning practices, etc.: a variety of price related terms are used to manipulate customers’ choices, often also by exploiting their behavioral biases. The result is an unfavorable contract that is later challenged in court. However, invalidating a given price term in standard forms e.g. of a banking or utilities contract only has an inter partes effect, which means that in thousands if not millions of similar contracts, the same clauses continue to be used. Effective procedural rules are often lacking. Therefore, pricing patterns that serve to hide rather than to reveal the real cost of goods and services require special attention on the part of regulators.

The aim of this book is to determine the various approaches in the world regarding price term control, and particularly to discuss the efficiency of both paths, ex ante regulatory and ex post judicial intervention. Thanks to its broad comparative analysis, this book offers a thorough overview of the methods employed in several countries. It gathers twenty-eight contributions from national rapporteurs and one supra-national rapporteur (EU) to the 2018 IACL Congress held in Fukuoka. These are supplemented by a general report presented at the same IACL Congress, which includes a comparative analysis of the national and supranational reports. The national contributors hail from around the globe, including Africa (1), Asia (5), Europe (17), the European Union (1) and the Americas (5).

Pascal Pichonnaz is a full professor for Swiss and Comparative Contract Law, European Consumer Law and Roman Law. He has been visiting scholar/professor at Georgetown, Paris 2, University of Rome 2, Pontificia Universidad Católica de Chile, Montpellier, Liège, Istanbul Bilgi University, Trento law schools. He is the editor in chief of the Revue de droit suisse/Zeitschrift für Schweizerisches Recht, and member of several editorial boards of Swiss and International Journals. Among others he is elected member of the Council of the European Law Institute (ELI) and the International Academy of Comparative Law. He serves regularly as arbitrator in commercial matters and as elected arbitrator of the CAS. Pichonnaz serves also as the acting President of the (Swiss) Federal Consumer Commission.