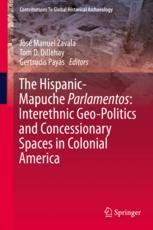 Anthropological histories and historical geographies of colonialism both have examined the material and discursive processes of colonization and have identified the opportunities for different kinds of relationships to emerge between Europeans and the indigenous people they encountered and in different ways colonized. These studies have revealed complex, differentiated, colonializing and colonialized identities, shifting and ambiguous political relations, social pluralities, and mutating and distinctive modes of colonization.

This book focuses on the complementary historical, linguistic, and archaeological evidence for indigenous resistance and resilience in the specific form of parlamento political negotiations or attempted treaties between the Spanish Crown and the Araucanians in south-central Chile from the late 1600s to the early 1800s.  Armed conflict, the rejection of most Spanish material culture, and the use of the indigenous Mapundungun language at parlamentos were obvious forms of Araucanian resistance.

From a bigger picture, the book is based on an interdisciplinary perspective and asserts that historical archeology can provide better interpretations of past societies only if combined with other disciplines experienced by the treatment of existing data for historical periods, such as those provided by the written documents and which can be subjected to an anthropological, ethnohistorical, and linguistic reading by these disciplines. This creates tension because complementarity but also requires a questioning of the methods themselves as an offset look in order to include the other disciplinary perspectives.​
Show all
About the authors

José Manuel Zavala, PhD in anthropology from the University of the Sorbonne Nouvelle-Paris III, has specialized in the study of the relations between colonial societies and indigenous peoples, in particular the Mapuche people of Chile and Argentina. His works on the Hispano-Mapuche parliaments, developed in collaboration with the co-authors of this work, have reconsidered a way of understanding the colonial dynamics and the insertion of the indigenous societies in these. He is a member of the Department of Historical Sciences of the Faculty of Philosophy and Humanities of the University of Chile. He also has been professor-researcher of the Catholic University of Temuco and visiting professor of the Universities of Paris III and Rennes II, and is a member of international research teams in Chile, Spain and the United States.

Tom D. Dillehay is the Rebecca Webb Wilson University Distinguished Professor of Anthropology, Religion, and Culture and Distinguished Professor of Anthropology and Latin American Studies in the Department of Anthropology, Profesor Titular de la Escuela de Arqueología de la Universidad Austral de Chile, Puerto Montt, and Adjunct Professor at several other universities in Latin America. He has carried out numerous archaeological and anthropological projects in Peru, Chile, Argentina and other South American countries and in the United States. His main interests are migration, the long-term transformative processes leading to political and economic change, and the interdisciplinary and historical methodologies designed to study those processes. He has published twenty-four books and more than four hundred refereed journal articles and book chapters. He currently directs several interdisciplinary projects focused on long-term human and environmental interaction on the north coast of Peru and on the political and cultural identity of the Mapuche people in Chile. Professor Dillehay has received numerous international and national awards for his research, books and teaching. He is a member of the American Academy of Arts and Sciences.