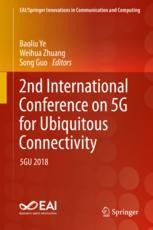 The book presents the proceedings of the 2nd International Conference on 5G for Ubiquitous Connectivity (5GU 2018), which took place on December 4-5, 2018 in Nanjing, People’s Republic of China. The aim of this conference is to bring together researchers and developers as well as regulators and policy makers to present their latest views on 5G, including new networking, new wireless communications, resource control & management, future access techniques, new emerging applications, and latest findings in key research activities on 5G. The book is applicable to researchers, academics, students, and professionals.

Dr. Baoliu Ye, Professor, Hohai University, China. He is a full professor and the dean of the School of Computer and Infomation, Hohai University. He received his Ph.D. in computer science from Nanjing University, China in 2004, and was a professor with Nanjing University from 2014. His current research interests mainly include distributed systems, cloud computing, wireless networks with over 70 papers published in major conferences and journals. Prof. Ye served as the TPC co-chair of HotPOST’12, HotPOST’11, P2PNet’10. He is the regent of CCF, the Secretary-General of CCF Technical Committee of Distributed Computing and Systems, and a member of IEEE.

Dr. Weihua Zhuang has been with the Department of Electrical and Computer Engi- neering, University of Waterloo, Canada, since 1993, where she is a Professor and a Tier I Canada Research Chair in Wireless Communication Networks. She is the recipient of 2017 Technical Recognition Award from IEEE Communications Society Ad Hoc & Sensor Networks Technical Committee, one of 2017 ten N2Women (Stars in Computer Network- ing and Communications), and a co-recipient of several best paper awards from IEEE conferences. Dr. Zhuang was the Editor-in-Chief of IEEE Transactions on Vehicular Technology (2007-2013), Technical Program Chair/Co-Chair of IEEE VTC Fall 2017 and Fall 2016, and the Technical Program Symposia Chair of the IEEE Globecom 2011. She is a Fellow of the IEEE, the Royal Society of Canada, the Canadian Academy of Engineering, and the Engineering Institute of Canada. Dr. Zhuang is an elected member in the Board of Governors and VP Publications of the IEEE Vehicular Technology Society. She was an IEEE Communications Society Distinguished Lecturer (2008-2011).

Dr. Song Guo is a Full Professor at Department of Computing, The Hong Kong Poly- technic University. He received his Ph.D. in computer science from University of Ottawa and was a professor with the University of Aizu. His research interests are mainly in the areas of big data, cloud computing and networking, and distributed systems with over 400 papers published in major conferences and journals. His work was recognized by the 2016 Annual Best of Computing: Notable Books and Articles in Computing in ACM Computing Reviews. He is the recipient of the 2017 IEEE Systems Journal Annual Best Paper Award and other five Best Paper Awards from IEEE/ACM conferences. Prof. Guo was an Associate Editor of IEEE Transactions on Parallel and Distributed Systems and an IEEE ComSoc Distinguished Lecturer. He is now on the editorial board of IEEE Transactions on Emerging Topics in Computing, IEEE Transactions on Sustainable Computing, IEEE Transactions on Green Communications and Networking, and IEEE Communications. Prof. Guo also served as General, TPC and Symposium Chair for numerous IEEE conferences. He currently serves as an officer for several IEEE ComSoc Technical Committees and a director in the ComSoc Board of Governors.