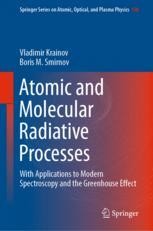 With Applications to Modern Spectroscopy and the Greenhouse Effect

This book describes selected problems in contemporary spectroscopy in the context of quantum mechanics and statistical physics. It focuses on elementary radiative processes involving atomic particles (atoms, molecules, ions), which include radiative transitions between discrete atomic states, the photoionization of atoms, photorecombination of electrons and ions, bremsstrahlung, photodissociation of molecules, and photoattachment of electrons to atoms. In addition to these processes, the transport of resonant radiation in atomic gases and propagation of infrared radiation in molecular gases are also considered.

The book subsequently addresses applied problems such as optical pumping, cooling of gases via laser resonance radiation, light-induced drift of gas atoms, photoresonant plasma, reﬂection of radio waves from the ionosphere, and detection of submillimeter radiation using Rydberg atoms. Lastly, topical examples in atmospheric and climate change science are presented, such as lightning channel glowing, emission of the solar photosphere, and the greenhouse phenomenon in the atmospheres of the Earth and Venus.

Along with researchers, both graduate and undergraduate students in atomic, molecular and atmospheric physics will find this book a useful and timely guide.

V.P. Krainov was born in Moscow in 1938. In 1962 he obtained a Master of Science in the field of theoretical nuclear physics and went on to complete his Doctor of Phys. Mat. Science in 1982. He became a professor of physics in 1986. Between 1963 and 1971 he worked as a scientist at the Kurchatov Institute of Atomic Energy in Moscow and was a professor at the Moscow Engineering Physics Institute from 1971 to 1992. Since then he has been a professor at Moscow Institute of Physics and Technology. Throughout his career his research has focused primarily on the theory of atomic, molecular, plasma and nuclear physics. He is the author of 27 books and about 380 papers.

Boris Smirnov was born in 1938 in Moscow. In 1962 he graduated from Moscow's Engineering-Physical Institute in theoretical nuclear physics and obtained his Doctor of Phys. Mat. Science in 1968. He became a professor of physics in 1970. Between 1962 and 1982 he was Head of Laboratory at Kurchatov Institute of Atomic Energy (Moscow), then from 1982 to 1986 Head of Laboratory at Institute of Thermophysics (Novosibirsk) and from 1986 Head of Laboratory and Head of Department and, currently, Principal Scientist at the Joint Institute for High Temperatures of the Russian Academy of Science. B.M. Smirnov was a member of the editorial board of several journals of various publishers. He was a professor at the Moscow Power Institute, Novosibirsk, State University and the Moscow Institute of Science and Technology, and is a laureate of the National Prize of Russia. His research focusses on theoretical physics, atomic, molecular, cluster, plasma and chemical physics. He is the author of 53 books and about 500 papers.