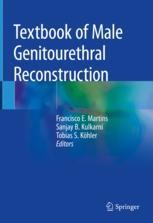 This textbook provides a guide to reconstructive surgery of genitourethral problems in male patients. The first section covers all aspects of urethral reconstruction, including the functional anatomy of the urethra, etiology, epidemiology, and demographic differences in urethral pathology. The second section focuses on surgical reconstruction of penile and scrotal anomalies and dysfunctions.

Textbook of Male Genitourethral Reconstruction aims to aid the management of male genitourethral reconstruction patients by reviewing the recent advancements in technology and surgical technique. This book is relevant to urologists, plastic and reconstructive surgeons, medical students, and health care professionals working within urology and plastic surgery.

Francisco Martins obtained his Medical Degree at the Faculty of Medicine, University of Lisbon in 1983. He earned his title as Specialist in Urology by the Portuguese Medical Association, College of Urology, in 1993. He has been engaged in several humanitarian outreach clinical visits in Ethiopia, Angola and Tanzania. His areas of major clinical and research interest are: Genito-urethral and Pelvic Trauma and Reconstruction, Vesicovaginal and Rectovaginal Fistula, Female Pelvic Medicine, Erectile Dysfunction, Urinary Diversion, and Penile Cancer. He has been Consultant Urological Surgeon at Santa Maria University Hospital (2008-present date). In May 2017, he was elected to the GURS Board of Directors (Genitourinary Reconstructive Surgeons) and in October 2917 and September 2018 was granted Honorary Membership of the Hungarian Urological Association (HUA) and South African Urological Asscociation (SAUA), respectively. He is member of several national and international societies and associations. He is member of the first EAU (European Association of Urology) Guidelines Panel for Urethral Strictures. He is peer reviewer for several journals, including, Acta Urológica Portuguesa, Actas Urológicas Españolas, Advances in Urology, Biomed Research International, British Journal of Medicine and Medical Research, European Urology, International Urology and Nephrology, Journal of Men’s Health, Journal of Surgery, World Journal of Urology and Journal of Urology. He has presented and lectured at numerous national and international meetings, conferences and congresses and has published and co-authored over 60 articles in peer review journals, 7 book chapters and edited 3 books on erectile dysfunction, penile cancer and male genitourethral reconstruction as well as 2 Special Issues for Advances in Urology and Biomed Research International.

Sanjay B. Kulkarni, MD, MS, Diploma Urology (London), FRCS (Glasgow), Hon. FRCS(London) is a nationally and internationally recognized expert in urethral reconstruction. He underwent Urology training in England from 1981 to 1986. He was trained by Mr Richard Turner Warwick, considered as father of urethral reconstruction. Dr Kulkarni returned to motherland India to serve the people of his country. His wife Dr Jyotsna Kulkarni and Sanjay were pioneer in introducing Laparoscopy in India. They started India’s first animal lab for Laparoscopy training. Dr Kulkarni established Centre for Reconstructive Urology in 1995. The centre performs one of the largest number of Genito-Urinary Reconstructive Surgeries in the world today. The centre is ethical and no patient is denied surgery for economic grounds. Kulkarni School of Urethral Surgery was established in 2006. The centre is engaged in permanent educational activities for urologists who are interested in the in-depth training in reconstructive urethral surgery. They conduct an operative workshop on a weekend once every month where about 8-10 Urologists from India and abroad attend inside the  OR and watch surgeries LIVE. Kulkarni school of urethral surgery is very popular amongst the urologists. This is a purely academic activity with no registration fees.Dr Kulkarni invented many techniques of reconstruction. The “Kulkarni Urethroplasty” for pan urethral stricture is popular around the world. He was awarded “President’s Gold Medal” by the Urology Society of India for outstanding contribution to Urology in India in 2011. Dr Kulkarni was the President of the society of Genito Urinary Reconstructive Surgeons in 2014.In 2016 Dr Sanjay Kulkarni was awarded “Dr BC Roy” award by the President of India for developing new speciality. In 2017 he was conferred Honorary membership of the Royal College of Surgeons of England and made Honorary member of the British Association of Urological Surgeons. He  currently serves as the President Elect of the Society International de Urology(2018-19).

Tobias S. Köhler, MD., MPH., FACS., Professor of Urology, specializes in the treatment of erectile and sexual dysfunction, and BPH (enlarged prostate) in the Department of Urology at the Mayo Clinic in Rochester, MN. He received both his undergraduate and medical degrees from the University of Minnesota in Minneapolis. He completed a Masters of Public Health in Epidemiology. He then completed his urology residency training at the University of Minnesota. This was followed by an andrology fellowship at Northwestern School of Medicine in Chicago. Dr. Köhler spent the first nine years of practice at Southern Illinois University School of Medicine in Springfield, Illinois before matriculating back to his home state of Minnesota. Dr. Köhler is an active member of American Urological Association, North Central Section, and the Sexual Medicine Society of North America. He has published more than 200 peer reviewed scientific articles, book chapters and scientific abstracts and presented both locally and nationally on various subjects including erectile dysfunction, low testosterone, BPH, surgical education, and penile prostheses. He was co-editor for both textbooks “Contemporary Treatment of Erectile Dysfunction – 2nd Edition” and “Surgeons as Educators, A Primer for Academic Development & Teaching Excellence”. He was nominated for the AUA Golden Cystoscope award by the North Central Section in both 2015 and 2016 and has received numerous awards and recognition for his research and teaching excellence. He was a graduate of the AUA Leadership Program in 2017. He is also a physician trainer for penile prosthesis surgery both in the United States and in Europe.