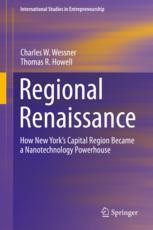 This book examines ways in which formerly prosperous regions can renew their economy during and after a period of industrial and economic recession. Using New York’s Capital Region (i.e., Albany, Troy, Schenectady, etc.) as a case study, the authors show how entrepreneurship, innovation, investment in education, research and political collaboration are critical to achieving regional success. In this way, the book provides other regions and nations with a real-life model for successful economic development.

In the past half century, the United States and other nations have seen an economic decline of formerly prosperous regions as a result of new technology and globalization. One of the hardest-hit United States regions is Upstate New York or “the Capital Region”; it experienced a demoralizing hemorrhage of manufacturing companies, jobs and people to other regions and countries. To combat this, the region, with the help of state leaders, mounted a decades-long effort to renew and restore the region’s economy with a particular focus on nanotechnology. As a result, New York’s Capital Region successfully added thousands of well-paying, skill-intensive manufacturing jobs. New York’s success story serves as a model for economic development for policy makers that includes major public investments in educational institutions and research infrastructure; partnerships between academia, industry and government; and creation of frameworks for intra-regional collaboration by business, government, and academic actors.
Featuring recommendations for best practices in regional development policy, this book is appropriate for scholars, students, researchers and policy makers in regional development, innovation, R&D policy, economic development and economic growth.
Show all
About the authors

Charles Wessner currently teaches and researches Global Innovation Policy at Georgetown University (USA). He served for two decades at the National Academy of Sciences (USA) where he founded and directed a globally recognized program on technology innovation and entrepreneurship. Widely recognized for his expertise on innovation policy, he frequently works with international organizations, lectures at universities and consults with governments around the world.

Thomas R. Howell is an international trade lawyer based in Washington DC.  He is the author of numerous books, client studies and academic articles on industrial and trade policy and innovation. He has served on a number of National Academies committees on innovation as a member and writer, and served on the Defense Science Board on Secure Microchip Supply (2004).
Show all