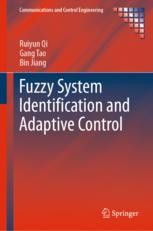 This book provides readers with a systematic and unified framework for identification and adaptive control of Takagi–Sugeno (T–S) fuzzy systems. Its design techniques help readers applying these powerful tools to solve challenging nonlinear control problems. The book embodies a systematic study of fuzzy system identification and control problems, using T–S fuzzy system tools for both function approximation and feedback control of nonlinear systems. Alongside this framework, the book also:

Fuzzy System Identification and Adaptive Control helps engineers in the mechanical, electrical and aerospace fields, to solve complex control design problems. The book can be used as a reference for researchers and academics in nonlinear, intelligent, adaptive and fault-tolerant control.

Ruiyun Qi received her B.E. degree in automatic control from University of Science and Technology of China in 2001 and Ph.D. degree in electrical engineering from University of Birmingham, U.K. 2007. She has been with College of Automation Engineering, Nanjing University of Aeronautics and Astronautics, China since 2008 where she is now a professor. Dr. Qi has done research work in fuzzy modeling and adaptive fuzzy control for over 15 years, and more recently, in adaptive fault-tolerant control with applications to aerospace and spacecraft systems. She has been the principle investigator for several projects of National Natural Science Foundation of China. She is the author of over 40 international journal papers and 60 conference papers. She won Second Prize of Science and Technology Progress Award of Jiangsu Province in 2009 and was selected into Jiangsu Six Talent Peaks Program in 2016.

Gang Tao received his B.S. (EE) degree from University of Science and Technology of China in 1982, M.S. (EE, CpE and APMA) degrees and Ph.D. (EE) degree from University of Southern California during 1984 and 1989. He is a full professor in Department of Electrical and Computer Engineering at University of Virginia and a Fellow of IEEE. For more than 30 years, he has worked in various areas of adaptive control theory and applications, with particular interests in adaptive control of systems with multiple inputs and multiple outputs, systems with nonsmooth nonlinearities, and systems with uncertain faults, in stability and robustness of adaptive control systems, and in passivity characterizations of control systems. His publications include the 2003 Wiley textbook Adaptive Control Design and Analysis (by Gang Tao), the 1996 Wiley book Adaptive Control of Systems with Actuator and Sensor Nonlinearities (by Gang Tao and Petar Kokotovic), the 2004 Springer book Adaptive Control of Systems with Actuator Failures (by Gang Tao, Shuhao Chen, Xidong Tang and Suresh M. Joshi), the 2003 Springer book Control of Sandwich Nonlinear Systems (by Avinash Taware and Gang Tao), the 2001 Springer book Adaptive Control of Nonsmooth Dynamic Systems (edited by Gang Tao and Frank Lewis), the 2009 book Advances in Control Systems Theory and Applications (edited by Gang Tao and Jing Sun), the 2015 book Adaptive Control (by Fuyang Chen, Gang Tao and Bin Jiang), and over 450 technical papers and book chapters.. Recently he has been working on adaptive control of systems with uncertain actuator failures and actuator nonlinearities, with structural damage, and with sensor uncertainties and failures, for aircraft, spacecraft, robot and high-speed train control applications.

Bin Jiang received the Ph.D. degree in Automatic Control from Northeastern University, Shenyang, China, in 1995. He had ever been postdoctoral fellow, research fellow, invited professor and visiting professor in Singapore, France, USA and Canada, respectively. Now he is a Chair Professor of Cheung Kong Scholar Program in Ministry of Education and Vice President of Nanjing University of Aeronautics and Astronautics, China. He currently serves as Associate Editor or Editorial Board Member for a number of journals such as IEEE Trans. on Control Systems Technology; Int. J. Of Control, Automation and Systems; Nonlinear Analysis: Hybrid Systems, etc. He is a senior member of IEEE, Chair of Control Systems Chapter in IEEE Nanjing Section, a member of IFAC Technical Committee on Fault Detection, Supervision, and Safety of Technical Processes. His research interests include intelligent fault diagnosis and fault tolerant control and their applications to helicopter, satellite and high-speed train.

He has been the principle investigator on several projects of National Natural Science Foundation of China. He is the author of 8 books and over 200 referred international journal papers and conference papers. He won Second Class Prize of National Natural science award of China in 2018.

“A welcome and timely treatise on modeling and control of fuzzy rule-based models that can be recommended to those interested in the area of fuzzy control.” (Witold Pedrycz, zbMATH 1432.93004, 2020)