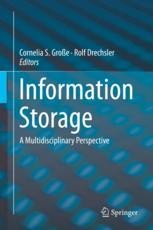 This book examines some of the underlying processes behind different forms of information management, including how we store information in our brains, the impact of new technologies such as computers and robots on our efficiency in storing information, and how information is stored in families and in society.

The editors brought together experts from a variety of disciplines. While it is generally agreed that information reduces uncertainties and that the ability to store it safely is of vital importance, these authors are open to different meanings of “information”: computer science considers the bit as the information block; neuroscience emphasizes the importance of information as sensory inputs that are processed and transformed in the brain; theories in psychology focus more on individual learning and on the acquisition of knowledge; and finally sociology looks at how interpersonal processes within groups or society itself come to the fore.

The book will be of value to researchers and students in the areas of information theory, artificial intelligence, and computational neuroscience.

Cornelia S. Große works in the domain of Educational Psychology and investigates topics of learning and instruction. She studied Psychology at the Albert-Ludwigs Universität, Freiburg, Germany, and received her Diploma in 2001. She continued working there with Alexander Renkl and finished her doctorate on learning with multiple solution methods in 2004. From 2005 to 2009 she worked as a lecturer in the field of educational diagnostics at the University of Bremen, Germany, followed by a postdoc position funded by the University of Bremen (2010-2011) where she continued working on learning with multiple solution methods. From 2012 to 2016 she investigated ways to foster competencies in mathematical modeling as PI in a DFG project. Since 2016, she has worked with Rolf Drechsler at the University of Bremen. Current research topics are cognitive processes in learning, learning with worked examples, and the acquisition of competencies in mathematics and computer science.

Rolf Drechsler received his Diploma and Dr. phil. nat. degrees in Computer Science from the Goethe-Universität Frankfurt am Main, Germany, in 1992 and 1995, respectively. He worked at the Institute of Computer Science, Albert-Ludwigs Universität, Freiburg, Germany, from 1995 to 2000, and at the Corporate Technology Department, Siemens AG, Munich, Germany, from 2000 to 2001. Since 2001, Rolf Drechsler has been a Full Professor and Head of the Group of Computer Architecture, Institute of Computer Science, at the University of Bremen, Germany. In 2011, he additionally became the Director of the Cyber-Physical Systems Group at the German Research Center for Artificial Intelligence (DFKI) in Bremen. His current research interests include the development and design of data structures and algorithms with a focus on circuit and system design. He is an IEEE Fellow.