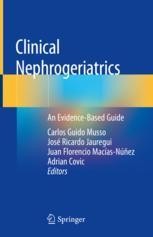 The increase in average life expectancy observed over recent decades has brought new challenges to nephrology practice. Several renal diseases are more frequent in elderly patients today, and even in healthy older individuals renal physiology has its own peculiarities. This leads to the need for a specific approach on renal aging and renal function in the elderly. However, despite the relevance of this topic, there are few books exclusively dedicated to geriatric nephrology.

This book fills this gap by presenting a comprehensive overview of the differences between normal renal aging and chronic renal disease in the aged, and describes the particular aspects of nephropathy in the elderly, addressing it in a practical and clinically applicable fashion.


Clinical Nephrogeriatrics bridges the gap between nephrology and geriatrics, discussing the most important issues concerning the relationship between these two medical specialties. This evidence-based resource, written by prominent specialists with extensive clinical experience, offers nephrologists, geriatricians, family physicians, and other medical professionals valuable practical guidelines and insights to enhance their clinical practice and provide optimal care.

Juan Florencio Macías-Núñez - is a primary physician in Nephrology & Geriatric Medicine, University of Salamanca, Dozor Professor of Geriatric Medicine, Ben-Gurion University of the Negev, Israel, Associate Member of the Geriatrics Division, University of Toronto, Canada, is director of the Career and Degree of Gerontology program at Maimónides University, Argentina and Director of Extraordinary Chair of the University of Salamanca, Iberoamerican Foundation for Research and Prevention of Renal and Cardiovascular Diseases in Geriatrics. Expert of the  ERBP for the diagnosis and treatment for diagnosis  and treatment of the frail elderly with advanced renal chronic disease. Member of the Clinical Practice Guideline on management of older patients with chronic kidney disease stage 3b or higher. He is editor of the first international textbook in geriatric nephrology.
Adrian Covic – is a primary physician in Nephrology and Internal Medicine. He is also a professor of Nephrology and Internal Medicine at the “Grigore T. Popa” University of Medicine and Pharmacy and chief of the Nephrology Clinic and the Dialysis and Transplantation Center in Iasi, Romania. Since 2007, he has been a FRCP (London) and in 2009 became a correspondent member of the Romanian Academy of Medical Sciences. He is also a fellow of the ERA-EDTA (FERA). Prof. Covic is a board member of KDIGO (Kidney Disease Improving Global Outcomes), ERBP (European Renal Best Practice) and ERA-EDTA working group EURECAM. He has published more than 300 papers in peer-reviewed journals, 12 books and 22 chapters.