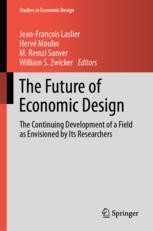 The Future of Economic Design

The Continuing Development of a Field as Envisioned by Its Researchers

This collection of essays represents responses by over eighty scholars to an unusual request: give your high level assessment of the field of economic design, as broadly construed. Where do we come from? Where do we go from here? The book editors invited short, informal reflections expressing deeply felt but hard to demonstrate opinions, unsupported speculation, and controversial views of a kind one might not normally risk submitting for review. The contributors – both senior researchers who have shaped the field and promising, younger researchers – responded with a diverse collection of provocative pieces, including: retrospective assessments or surveys of the field; opinion papers; reflections on critical points for the development of the discipline; proposals for the immediate future; "science fiction"; and many more. The readers should have fun reading these unusual pieces – as much as the contributors enjoyed writing them.

​Jean‑François Laslier works at the CNRS (French National Center of Scientific Research). With a background in Mathematics, he obtained his PhD in Economics (Cnam Paris) in 1991. His research interests include Mathematical Economics, Games and Social Choice Theory, and Political Science. He does research on democracy, and in particular on voting rules and voting behavior, from the formal and from the experimental points of view. He teaches at the Paris School of Economics and publishes his work in the two fields Economics and Political Science.

Hervé Moulin received a Ph.D. in mathematics from the Université de Paris in 1975, and afterwards has taught Microeconomics in France, the USA, and currently at the University of Glasgow. His work in Mechanism Design includes the incentive properties of generalized median voting rules  and of voting by successive veto; fair rules to divide an estate, workloads, or over-demanded commodities such as organs for transplant or seats for a popular event; and the exploitation of a common property technology. His most recent textbook, Fair Division and Collective Welfare (MIT Press 2003), introduces the broad contributions of microeconomic analysis to fair division problems.

M. Remzi Sanver received a PhD in Economics from Boğaziçi University in 1998. For several years, he worked as a faculty member at Istanbul Bilgi University where he was the President between 2011-2015. His research is in mathematical social sciences, with particular emphasis in the theory of social design, choice and welfare. He is the founding director of the Murat Sertel Center for Advanced Economic Studies. Since October 2015, he is a director of research at CNRS, working at LAMSADE, Université Paris Dauphine.

William S. Zwicker studied Mathematics at Harvard and M.I.T., where his 1975 Ph.D. focused on logic and set theory. Since then Bill's academic career has been at Union College, where in 2006 he was named the William D. Williams Professor of Mathematics. Today he works on applications of mathematics to the social sciences: social choice, fair division, and cooperative game theory.   Bill serves on the editorial board of Mathematical Social Sciences and is co-author, with Alan D. Taylor, of the monograph Simple Games (Princeton, 1999).