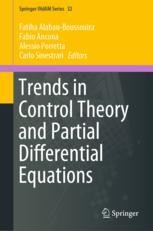 This book presents cutting-edge contributions in the areas of control theory and partial differential equations. Over the decades, control theory has had deep and fruitful interactions with the theory of partial differential equations (PDEs). Well-known examples are the study of the generalized solutions of Hamilton-Jacobi-Bellman equations arising in deterministic and stochastic optimal control and the development of modern analytical tools to study the controllability of infinite dimensional systems governed by PDEs. In the present volume, leading experts provide an up-to-date overview of the connections between these two vast fields of mathematics. Topics addressed include regularity of the value function associated to finite dimensional control systems, controllability and observability for PDEs, and asymptotic analysis of multiagent systems. The book will be of interest for both researchers and graduate students working in these areas.

Fatiha Alabau-Boussouira gained her PhD at the Pierre and Marie Curie University, Paris, in 1987. She was an Assistant Professor at the University of Bordeaux from 1988 until 1997, when she became a Full Professor at the Louis Pasteur University in Strasbourg; she subsequently moved to the University of Metz in 1999 (which became the University of Lorraine in 2012). She carries out her research at the Jacques-Louis Lions Laboratory at Sorbonne University. She is the author of more than 60 papers in mathematics analysis and applications. Her scientific interests mainly focus on the theory of control and stabilization of partial differential equations. From 2014 to 2017, she was President of the French Society of Applied and Industrial Mathematics (SMAI). She is now the head for France of the French-German-Italian LIA COPDESC on Applied Analysis.

Fabio Ancona obtained his PhD in Mathematics in 1993 at University of Colorado at Boulder. He was a Research Associate in Mathematical Analysis at University of Bologna from 1995 until 2001, when he became Associate Professor. In 2008 he moved to the University of Padua, where he became Full Professor in 2017. He is the author of more than 40 papers in mathematics analysis and applications.  His scientific interests mainly focus on the theory of control and of hyperbolic partial differential equations.

Alessio Porretta is Full Professor of Mathematical Analysis at the University of Rome Tor Vergata. His research activity focuses mainly on convection-diffusion equations, Hamilton-Jacobi, control theory, and mean field games. He has given seminars in more than 20 universities in Italy and abroad and has recently been invited to give courses on mean field games in Paris, Chicago, and ETH Zurich. He has authored over 70 research papers, with nearly 1000 citations in math journals.

Carlo Sinestrari received his PhD from the University of Rome Tor Vergata, where he later became a Full Professor in Mathematical Analysis. His research interests include the analysis of nonlinear first-order partial differential equations and the formation of singularities for geometric evolution equations. He is the author of more than 40 papers in research journals. Together with P. Cannarsa he has written a monograph on semiconcave functions and their applications to optimal control theory.