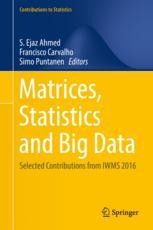 This volume features selected, refereed papers on various aspects of statistics, matrix theory and its applications to statistics, as well as related numerical linear algebra topics and numerical solution methods, which are relevant for problems arising in statistics and in big data. The contributions were originally presented at the 25th International Workshop on Matrices and Statistics (IWMS 2016), held in Funchal (Madeira), Portugal on June 6-9, 2016.

The IWMS workshop series brings together statisticians, computer scientists, data scientists and mathematicians, helping them better understand each other’s tools, and fostering new collaborations at the interface of matrix theory and statistics.

S. Ejaz Ahmed is a Professor of Statistics and the Dean of the Faculty of Mathematics and Science at the Brock University, Canada. Previously, he was a Professor and the Head of the Mathematics and Statistics Department at the University of Windsor and University of Regina, both in Canada, as well as an Assistant Professor at the University of Western Ontario. He holds various adjunct professorship positions and has supervised numerous Ph.D. and master students. An elected fellow of the American Statistical Association, he has also organized several workshops, conferences and invited sessions. His areas of expertise include big data analysis, statistical inference, and shrinkage estimation. He has authored several books, edited and co-edited a number of volumes and special issues of scientific journals. He has published a total of more than 150 articles in scientific journals and reviewed over 100 books. He served on the Board of Directors of the Statistical Society of Canada, and was also the Chairman of its Education Committee. Moreover, he was the Vice President of Communications for the International Society for Business and Industrial Statistics (ISBIS) and a member of the “Discovery Grants Evaluation Group” and the “Grant Selection Committee” of the Natural Sciences and Engineering Research Council of Canada (NSERC).

Francisco Carvalho is a Professor of Statistics, Data Analysis and Econometrics, as well as the Director of the Management School at the Polytechnic Institute of Tomar, Portugal. Apart from being a member of organizing committees of several international conferences, he is also a researcher at the CMA – Center of Applied Mathematics at the New University of Lisbon, Portugal. His scientific work primarily focuses on estimation in linear models.

Simo Puntanen is an Emeritus Docent from the University of Tampere, Finland. He is a founding member of the International Workshop on Matrices and Statistics (IWMS) series (with George P. H. Styan), co-author of two Springer books, editor of several books and special issues of international journals, and a member of several journals’ editorial boards. His scientific output chiefly concerns matrix methods and their applications in linear statistical models.