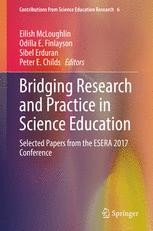 Selected Papers from the ESERA 2017 Conference

This edited volume presents innovative current research in the field of Science Education. The chapter’s deal with a wide variety of topics and research approaches, conducted in a range of contexts and settings. Together they make a strong contribution to knowledge on science teaching and learning. The book consists of selected presentations from the 12th European Science Education Research Association (ESERA) Conference, held in Dublin, Ireland from 21st to 25th August, 2017. The ESERA community is made up of professionals with diverse disciplinary backgrounds from natural sciences to social sciences. This diversity enables a rich understanding of cognitive and affective aspects of science teaching and learning. The studies in this book will stimulate discussion and interest in finding new ways of implementing and researching science education for the future. The twenty-two chapters in this book are presented in four parts highlighting innovative approaches to school science, emerging identities in science education, approaches to developing learning and competence progressions, and ways of enhancing science teacher education. This collection of studies showcases current research orientations in science education and is of interest to science teachers, teacher educators and science education researchers around the world with a commitment to bridging research and practice in science teaching and learning.

Eilish McLoughlin is an Associate Professor in the School of Physical Sciences and Director of the Research Centre for the Advancement of STEM Teaching and Learning (CASTeL) at Dublin City University. She obtained her PhD in Experimental Surface Physics and for the past 18 years her interests have evolved to focus on physics and science education research that examine the development of curriculum, instruction and assessment models in STEM education, at all levels of education, from primary school to PhD level. She has led and collaborated in many research projects at EU, national, and local levels, including EU FP-7 project SAILS and co-ordinator of EU FP-7 project ESTABLISH. She co-leads the physics initial teacher education programme at Dublin City University and has led several projects that support teachers, both in-service and pre-service, in adopting innovative practices in their classrooms and enhance student identity in Physics. She has received recognition for her leadership in STEM Education and engagement across formal and informal contexts: including the NAIRTL National Award for Teaching Excellence (2010); Institute of Physics Lise Meitner Medal (2018) and the Young Professional Physicist of the Year (2016) and Dublin City University’s President Award for Public Engagement (2017) and for Teaching and Learning (2005).

Odilla E. Finlayson is Associate Professor of Science Education in the School of Chemical Sciences, Dublin City University. She is one of the founding members of CASTeL (Centre for the Advancement of STEM Teaching and Learning) in Dublin City University and plays an active part in its management and development. She is involved in teaching (mainly physical) chemistry to undergraduate science students and to pre-service teachers. She is interested in curriculum development at second level and was a member of the Board of Science Studies in NCCA (National Council for Curriculum and Assessment. She sits on the Council of the Institute of Chemistry of Ireland, where she is Registrar and also convenor of the Education Committee.  Current research interests are in sustaining science across transitions and in particular in development of appropriate science (chemistry) curricula and assessment. She is also involved in co-ordinating Ireland’s involvement in science Olympiads, namely International Junior Science Olympiad, European Union Science Olympiad and the International Chemistry Olympiad, as Country Co-ordinator and mentor. She has been involved in many local and international research projects, including EU FP-7 project ESTABLISH and co-ordinator of EU FP-7 project SAILS.

Sibel Erduran is a Professor of Science Education at University of Oxford and a Fellow of St Cross College. She also holds a Visiting Professorship position at Zhejiang Normal University, China. She is an Editor for International Journal of Science Education, Section Editor for Science Education, andserves on the Executive Board of European Science Education Research Association. Her work experience includes positions in the USA (University of Pittsburgh), Ireland (University of Limerick) as well as other universities in the UK (King’s College London and University of Bristol). Previously she held Visiting Professorships at Oxford Brookes University, National Taiwan Normal University, Kristianstad University, Sweden, and Bogazici University, Turkey. Her higher education was completed in the USA at Vanderbilt (PhD, Science Education & Philosophy), Cornell (MSc, Food chemistry and Chemistry) and Northwestern (BA, Biochemistry) Universities. She has worked as a chemistry teacher in a high school in Northern Cyprus. Her research interests focus on the infusion of epistemic practices of science in science education, in particular chemistry education.  Her work has received international recognition through awards from NARST and EASE. She is currently the Principal Investigator of projects funded by the Wellcome Trust and Templeton World Charity Foundation. Her edited book on Argumentation in Chemistry Education: Research, Policy and Practice (Royal Society of Chemistry) and co-authored book on Transforming Teacher Education through the Epistemic Core of Chemistry: Empirical Evidence and Practical Strategies (Springer) are published in 2019.

Peter E. Childs, University of Limerick. After reading Chemistry at Oxford (1965) and completing a D.Phil., in solid state chemistry (1967), he spent 2 years in North Western University on a postdoctoral fellow with a Fulbright scholarship. He then spent 6 years teaching chemistry from 1970 at Makerere University, Kampala, Uganda where he became interested in working with teachers to improve school chemical education. Returning to the UK he had one year each at York and Leeds on research fellowships, before coming to Ireland in 1978. Initially he taught chemistry and chemical education at Thomond College of Education to intending second-level teachers, and in 1990 joined the chemistry department in the University of Limerick, when the two institutions merged. He then taught inorganic and environmental chemistry, and worked with intending chemistry teachers, until 2009 when he retired. Since he began his retirement he has directed the Chemistry Education Research Group and been involved in three EU-funded projects: SALiS, a Tempus project (2010-2012); TEMI, an FP7 project, 2013-206; ARTIST, an Erasmus+ project, 2017-2019. He has worked intensively with chemistry teachers since coming to Ireland; he started the magazine Chemistry in Action! in 1980, the ChemEd-Ireland conferences in 1982, and the Chemistry Demonstration Workshops in 2004, as well as running many in-service courses and workshops and industry study tours. A number of people have gained PhDs and Masters in science/chemical education under his supervision. He is past Chair of the EuCheMS Division of Chemical Education, and Past-President of the Irish Science Teachers Association and of the Institute of Chemistry of Ireland. His work in chemical education has been recognised by the BP Science Educator of the year award by the ISTA, the Boyle-Higgins Gold Medal of the Institute of Chemistry of Ireland and an education award from Pharmachemical Ireland. As well as chemical education he is also interested in the history of chemistry, the chemical industry and science education.
Show all