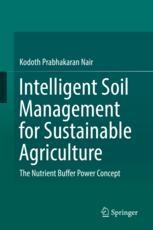 This book conceptualizes a revolutionary idea based on a mechanistic-mathematical model in which the “Buffer Power” of the principal and problematic nutrients like phosphorus, potassium and zinc is quantified. This is achieved by using either a very sophisticated technique, electro-ultra-filtration, or a simple adsorption-desorption equilibrium technique, and by integrating the “Buffer Power” of the nutrient in question into the computations, accurate fertilizer recommendations are made. This technique was field tested across Europe, (Germany and Belgium), Africa (The Republic of Cameroon), and Asia (both Central Asia- Turkey and South Asia-India), during a period of three decades in test crops, such as, summer rye (Secale cereale), maize (Zea mays), wheat (Triticum aestivum), white clover (Trifolium repens), a highly nutritious and palatable fodder crop for Africa, black pepper (Piper nigrum) and cardamom (Elettaria cardamomum). Remarkable precision in predictability of plant uptake of phosphorus, potassium and zinc was obtained employing the technique.

“The Nutrient Buffer Power Concept” project was shortlisted for the very prestigious U.S. $1 Million Rolex Awards For Enterprise of The Rolex Foundation, Geneva, Switzerland, for its outstanding originality and quality from more than 3500 nominations worldwide and is the only project chosen for this very coveted distinction from the Asian continent.

Professor Nair was appointed to the National Chair of the Science Foundation, The Royal Society, Belgium, and, affiliated to the State University of Ghent.  Subsequently worked as Professor & Head, Departments of Agriculture, Soil Sciences and Basic Sciences at the University Center, Dschang, The Republic of Cameroon, Senior Professor at the University of Fort Hare, Alice, The Republic of South Africa. Currently Chief Scientific Advisor, The Proletarian Foundation of India. Recipient of The Robertson Memorial Gold medal for outstanding work in Agronomy and many other national and international awards.

Professor Nair has authored more than 100 peer reviewed research papers published in prestigious international journals, nine books (three published by Elsevier) of which one “ISSUES IN NATIONAL AND INTERNATIONAL AGRICULTURE” was launched by India’s great President late Dr A.P.J.Abdul Kalam. The only agricultural scientist in the world to have been invited six times to contribute invitational chapters to ADVANCES IN AGRONOMY, the magnum opus of agricultural science. ”The Nutrient Buffer Power Concept” project was shortlisted for the very prestigious U.S. $ 1 Million Rolex Awards For Enterprise 2012 of The Rolex Foundation, Geneva, Switzerland, for its originality from more than 3500 nominations worldwide, and is the only project selected for this coveted distinction from the Asian continent.