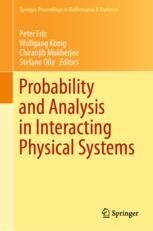 This Festschrift on the occasion of the 75th birthday of S.R.S. Varadhan, one of the most influential researchers in probability of the last fifty years, grew out of a workshop held at the Technical University of Berlin, 15–19 August, 2016. This volume contains ten research articles authored by several of Varadhan's former PhD students or close collaborators. The topics of the contributions are more or less closely linked with some of Varadhan's deepest interests over the decades: large deviations, Markov processes, interacting particle systems, motions in random media and homogenization, reaction-diffusion equations, and directed last-passage percolation.

The articles present original research on some of the most discussed current questions at the boundary between analysis and probability, with an impact on understanding phenomena in physics. This collection will be of great value to researchers with an interest in models of probability-based statistical mechanics.

Peter K. Friz studied in Vienna, Paris and Trinity College, Cambridge, before earning his PhD (2000–2003) at NYU's Courant Institute under the supervision of S.R.S. Varadhan. After holding positions at Merrill Lynch and Cambridge University, he moved to Berlin in 2009, where he is presently Einstein Professor at TU and WIAS Berlin. He works in stochastic/rough analysis and quantitative finance.

Wolfgang König received his PhD at the University of Zurich in 1994. After holding postdoc positions in the Netherlands, the UK and Canada, and an assistant professor position at TU Berlin, he spent five years in Leipzig as a professor. In 2009 he moved back to Berlin to accept a joint position as professor at TU Berlin and head of a research group at WIAS. He works on applied probability, large deviations and statistical mechanics.

Chiranjib Mukherjee obtained his PhD in Mathematics at the Max Planck Institute Leipzig and the University of Leipzig in 2011. After holding postdoc positions in Erlangen, Munich and Berlin, he was a visiting assistant professor at the Courant Institute, NYU, where he collaborated with S.R.S. Varadhan. Since April 2017 he has been an assistant professor of mathematics, specialising in probability theory, at the University of Münster, Germany. His research interests lie in stochastic analysis, PDEs and applications to statistical mechanics.

Stefano Olla earned his PhD at Rutgers University (1987) under the direction of Joel Lebowitz and was a postdoc at the Courant Institute, where he collaborated with S.R.S. Varadhan. After holding positions in Rome, Torino and Cergy-Pontoise, he has been a professor at the Université Paris Dauphine-PSL since 2002. He works in non-equilibrium statistical mechanics and hydrodynamic limits.