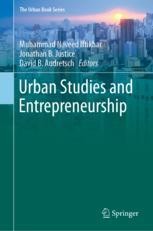 This book attempts to advance critical knowledge and practices for fostering a variety of entrepreneurship at a city level. The book aims to connect scholarship and policy practice in two disciplines: Urban Studies and Entrepreneurship. The book has included contributions from developed, emerging, and developing countries. The chapters are clubbed under five main sections;  I. Startups and Entrepreneurial Opportunities, II. Knowledge Spillover, III. Social and Bureaucratic Entrepreneurialism, IV. Demography and Informal Entrepreneurs V. Perspectives from Emerging and Developing Economies.
In this regard, the book explores a number of questions, such as: what are the important varieties of entrepreneurship, how can they be observed and measured, and how does each variety emerge and operate under various conditions of infrastructure and opportunity? Which type(s) of entrepreneurship should a city prefer? What can cities do to stimulate desirable forms of entrepreneurship or is it more of a spontaneous phenomenon? Why do policies that enhance entrepreneurship in some contexts seem instead to promote crony capitalism and rent-seeking in other contexts? Should cities focus on growing their own entrepreneurs and entrepreneurial enterprises or on luring them from other cities and countries? How can a collective action in a city promote (or hinder) entrepreneurship? The contributions in the present volume address head-on these questions at the intersection of urban studies, economic theory, and the practicalities of economic development and urban governance, in a genuinely global range of places and applications.

Muhammad Naveed Iftikhar is a PhD Candidate at the University of Delaware's Joseph R Biden, Jr School of Public Policy and Administration (SPPA) in Delaware, USA. He has been working with public, academic and international development organizations in the areas of economic policy, good governance, urban policy, economic reforms, private sector development and public-private partnerships. His current research and policy work focus on entrepreneurship, cities, and public sector governance.
Dr. Jonathan B Justice is a professor in the Joseph R. Biden, Jr. School of Public Policy and Administration at the University of Delaware, where he teaches undergraduate courses in public policy; graduate courses in public and nonprofit financial management, government budgeting, and local economic development; and the Seoul Case Study Program. His research interests include public budgeting and finance, and professional accountability. His recent publications include the Handbook of Local Government Fiscal Health and articles in Public Finance and Management, Public Performance and Management Review, and Public Integrity. Before earning his PhD from Rutgers University—Newark in 2003, he worked as a project and program manager for local governments and local economic development organizations in and around New York City.
Dr. David B. Audretsch is a Distinguished Professor and the Ameritech Chair of Economic Development at Indiana University, where he also serves as Director of the Institute for Development Strategies. He is an Honorary Professor of Industrial Economics and Entrepreneurship at the WHU-Otto Beisheim School of Management in Germany and a Research Fellow of the Centre for Economic Policy Research in London.
Audretsch’s research has focused on the links between entrepreneurship, government policy, innovation, economic development, and global competitiveness. He is co-author of The Seven Secrets of Germany, published by Oxford University Press. He is co-founder and Editor-in-Chief of Small Business Economics: An Entrepreneurship Journal. He was awarded the Global Award for Entrepreneurship Research by the Swedish Entrepreneurship Forum (Entreprenörskapsforum) and has received honorary doctorates from the University of Augsburg in Germany and Jonköping University in Sweden. Audretsch was also awarded the Schumpeter Prize by the University of Wuppertal in Germany.
Audretsch has served as an advisory board member to a number of international research and policy institutes, including the German Institute for Economic Analysis Berlin (as Chair); the Foundation for the Promotion of German Science in Berlin, Germany (as Chair); the Center for European Economic Research in Mannheim, Germany; National Academies of Sciences, Engineering and Medicine; New York Academy of Sciences; the Swedish Entrepreneurship Forum in Stockholm, Sweden; and the Jackstädt Centre for Entrepreneurship in Wuppertal, Germany.