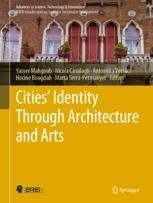 Cities' Identity Through Architecture and Arts

This book covers a broad range of topics relating to architecture and urban design, such as the conservation of cities’ culture and identity through design and planning processes, various ideologies and approaches to achieving more sustainable cities while retaining their identities, and strategies to help cities advertise themselves on the global market.
Every city has its own unique identity, which is revealed through its physical and visual form. It is seen through the eyes of its inhabitants and visitors, and is where their collective memories are shaped. In turn, these factors affect tourism, education, culture & economic prosperity, in addition to other aspects, making a city’s identity one of its main assets.
Cities’ identities are constructed and developed over time and are constantly evolving physically, culturally and sociologically. This book explains how architecture and the arts can embody the historical, cultural and economic characteristics of the city. It also demonstrates how cities’ memories play a vital role in preserving their physical and nonphysical heritage. Furthermore, it examines the transformation of cities and urban cultures, and investigates the various new approaches developed in contemporary arts and architecture.
Given its scope, the book is a valuable resource for a variety of readers, including students, educators, researchers and practitioners in the fields of city planning, urban design, architecture and the arts.

Professor Yasser Mahgoub, is an architect, academic, and scholar. With more than 35 years of experience in architecture, Professor Mahgoub was a founding member in 1980 of “The Egyptian Designers” architectural firm. He has held several academic positions since 1990 at Ain Shams University, United Arab Emirates University, Kuwait University, and Qatar University. Professor Mahgoub has a number of publications in the field of architecture ranging from book chapters to peer-reviewed articles. His research interests include the social and cultural aspects of architecture, sustainable architecture, architectural pedagogy and the impact of globalization on architecture. He has also served as a scientific referee for many scientific conferences and journals and has attended and presented papers in several international and regional conferences.

Professor Nicola Cavalagli has more than 10 years of experience in the field of civil and architecture engineering. Professor Cavalagli aim to design, validate and promote responsive systems and solutions for effective resilience of CH against climate change effects. This is considered to be a mandatory premise holistic, multidisciplinary approach through the involvement of different expertise’s including end-users, industry/SMEs, scientists, conservators/restorers and social experts, decision, and policy makers. Professor Cavalagli’s research interest includes Civil Engineering, Architecture Engineering, Finite Element Method, and Computation Mechanics.

Professor Antonella is an Assistant Professor in Kore University of Enna in the Faculty of Engineering and Architecture. Professor Versaci has a obtained her Civil Engineering degree in 1996, her CEAA- Certificat d-Etudes Approfondies urbaine (Ecole d-Architecture de Paris-Belleville) in paris in 1998 and her DEA Diploma in 1999. By 2005, she became a research doctor in the University of Paris VIII with honors and unanimity with a thesis on historical centers in France. From June 2004 to September 2008, Prof. Antonella became a UNESCO international official with responsibilities over numerous cultural projects in South-East Europe with several cases on restorations in Tyrana and Skopje. In 2009, she became a full-time researcher and an Assistant Professor for three years in the University of Enna "KORE"- Faculty of Engineering and Architecture. She had been responsible for the Resortation Laboratory of Architectural and Cultural Geritage since 2012. Also, an associate researcher at the Institut Parisien de Recherche Architecture Urbanistique Société research of the Ecole Nationale Superieure d'Architecture de Paris-Belleville, her areas of interest include architectural, urban restoration, conservation and enhancement of cultural heritage, advanced 3D survey and diagnostics applied to architectural and historical assets etc.

Professor Hocine Bougdah has over 25 years of experience in the field of Architectural Technology and Environment. Professor Bougdah’s teaching and research interests are focused on the technological, ecological and human aspects of architectural design. His research interests cover topics such as sustainable design, innovative low-tech, low-energy, low-impact buildings, the spatial experience of users and the issues of culture, urbanization and globalization. He is currently working on a number of research projects on the following topics, ultra-low energy housing, communication and workflow in the design process, immateriality in architecture (exploration of the user's spatial experience, climate change adaptation through community-driven Initiatives in the global South, and the relationship between culture and space in the post-colonial architecture of Algeria.
Marta Serra Permanyer
Marta Serra (1981) is a PhD Architect, researcher and adjunct lecturer in the Department of Theory and History of Architecture at the Vallès School of Architecture, Polytechnic University of Catalonia – Barcelona Tech. Her research focuses on the community dimension of architecture and urbanism by investigating the social role of the architect within the design process and the autonomy of the user, theory about public space, creative spatial practices and theory from various humanist architects from the 20th century. She runs projects and courses dealing with participatory design, learning-service, urban perception, informal urbanism, memory of place, communal experiences, self-sufficiency, community planning and co-creation. Her granted dissertation “Latent Spaces: Contemporary Practices in Art Towards a Critical Urbanism” (cum laude 2014 with European Mention) includes public space politics, creative spatial practices and theory from various humanist architects from contemporary history. She has lectured at the Illinois Architecture Study Abroad Program at Barcelona-El Vallès (2018 and 2019) and was visiting professor at Università degli Studi di Enna Kore (2015-2016). Co-founder of the co-op Cíclica [space · community · ecology] (www.ciclica.eu), she has run projects awarded first prize by Bauwelt 2017 and European Prize for Urban Public Space 2016 amongst other international nominations.