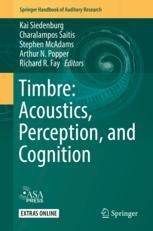 Roughly defined as any property other than pitch, duration, and loudness that allows two sounds to be distinguished, timbre is a foundational aspect of hearing. The remarkable ability of humans to recognize sound sources and events (e.g., glass breaking, a friend’s voice, a tone from a piano) stems primarily from a capacity to perceive and process differences in the timbre of sounds. Timbre raises many important issues in psychology and the cognitive sciences, musical acoustics, speech processing, medical engineering, and artificial intelligence. Current research on timbre perception unfolds along three main fronts: On the one hand, researchers explore the principal perceptual processes that orchestrate timbre processing, such as the structure of its perceptual representation, sound categorization and recognition, memory for timbre, and its ability to elicit rich semantic associations, as well as the underlying neural mechanisms. On the other hand, timbre is studied as part of specific scenarios, including the perception of the human voice, as a structuring force in music, as perceived with cochlear implants, and through its role in affecting sound quality and sound design. Finally, computational acoustic models are sought through prediction of psychophysical data, physiologically inspired representations, and audio analysis-synthesis techniques. Along these three scientific fronts, significant breakthroughs have been achieved during the last decade.
This volume will be the first book dedicated to a comprehensive and authoritative presentation of timbre perception and cognition research and the acoustic modeling of timbre. The volume will serve as a natural complement to the SHAR volumes on the basic auditory parameters of Pitch edited by Plack, Oxenham, Popper, and Fay, and Loudness by Florentine, Popper, and Fay. Moreover, through the integration of complementary scientific methods ranging from signal processing to brain imaging, the book has the potential to leverage new interdisciplinary synergies in hearing science. For these reasons, the volume will be exceptionally valuable to various subfields of hearing science, including cognitive auditory neuroscience, psychoacoustics, music perception and cognition, but may even exert significant influence on fields such as musical acoustics, music information retrieval, and acoustic signal processing.

It is expected that the volume will have broad appeal to psychologists, neuroscientists, and acousticians involved in research on auditory perception and cognition.  Specifically, this book will have a strong impact on hearing researchers with interest in timbre and will serve as the key publication and up-to-date reference on timbre for graduate students, postdoctoral researchers, as well as established scholars.

Dr. Kai Siedenburg is Marie Skłodowska-Curie Independent Postdoctoral Fellow in the Department of Medical Physics and Acoustics at the University of Oldenburg, Germany.
Dr. Charalampos Saitis is Humboldt Research Fellow in the Audio Communication Group at the Technical University of Berlin. Drs. Saitis and Siedenburg have published papers on musical sound quality and timbre, respectively. They conceived and co-organized the 2017 Berlin Interdisciplinary Workshop on Timbre.
Dr. Stephen McAdams is Canada Research Chair in Music Perception and Cognition and professor in the Schulich School of Music at McGill University, Montreal. Dr. McAdams is an internationally recognized expert on the perception and cognition of timbre.