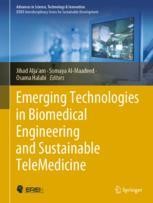 This book presents the most recent research and applications in Biomedical Engineering, electronic health and TeleMedicine. Top-scholars and research leaders in the field contributed to the book. It covers a broad range of applications including smart platforms like DietHub which connects patients with doctors online. The book highlights the advantages of Telemedicine to improve the healthcare services and how it can contribute to the homogenization of medicine without any geographical barriers. Telemedicine transforms local hospitals, with limited services, into a node of an integrated network. In this manner, these nodes start to play an important role in preventive medicine and in high-level management of chronic diseases.
The authors also discuss the challenges related to “health informatics” and in “e-health management”. The topics of the book include: synchronous and asynchronous telemedicine with deep discussions on e-health applications, virtual medical assistance, real-time virtual visits, digital telepathology, home health monitoring, and medication adherence, wearable sensors, tele-monitoring hubs and sensors, Internet of Things, augmented and virtual reality as well as e-learning technologies. The scope of the book is quite unique particularly in terms of the application domains that it targets. It is a unique hub for the dissemination of state of the art research in the telemedicine field and healthcare ecosystems. The book is a reference for graduate students, doctors, and researchers to discover the most recent findings, and hence, it achieves breakthroughs and pushes the boundaries in the related fields.

Professor Dr. Jihad Mohamed Alja’am (Lead Editor)
Jihad Mohamed Alja’am received the Ph.D. degree, MS. degree and BSc degree in computing from Southern University (The National Council for Scientific Research, CNRS), France. He worked on the connection machine CM5 with 65000 microprocessors in the USA. He was with IBM-Paris as Project Manager and with RTS-France as IT Consultant for several years. He is currently with the Department of Computer Science and Engineering at Qatar University as full professor. He organized many workshops and conferences in France, USA and the GCC countries. His current research interests include multimedia, assistive technology, learning systems, human–computer interaction, stochastic algorithms, artificial intelligence, information retrieval, and natural language processing. Dr. Alja’am is a member of the editorial boards of the Journal of Soft Computing, American Journal of Applied Sciences, Journal of Computing and Information Sciences, Journal of Computing and Information Technology, and Journal of Emerging Technologies in Web Intelligence. He acted as a scientific committee member of different international conferences (ACIT, SETIT, ICTTA, ACTEA, ICLAN, ICCCE, MESM, ICENCO, GMAG, CGIV, ICICS, and ICOST). He is a regular reviewer for the ACM computing review and the journal of supercomputing, IEEE ACCESS (Associate Editor). He has collaborated with different researchers in Canada, France, Malaysia, GCC and USA. He published so far 159 papers, 8 books chapters in computing and information technology which are published in conference proceedings, scientific books, and international journals. Prof. ALJA’AM is the main organizer and general chair of the international conference on computer and applications. He is leading a research team in multimedia and assistive technology and collaborating in the Financial Watch and Intelligent Document Management System for Automatic Writer Identification and MOALEM projects. Prof. ALJA’AM received the 2015 ACM Transactions on Multimedia Computing, Communications and Applications (TOMM) Nicolas D. Georganas Best Paper Award. And the best research paper of the 10th annual international conference on computer games multimedia & allied technologies (Singapore, 2016).

Dr. Sumaya Ali S A Al-Maadeed
Somaya Al-maadeed received her PhD degree in Computer Science from Nottingham, U.K., in 2004. Currently she is the head of Computer Science department at Qatar University (QU). She is also the coordinator of Computer Vision research group at Qatar University. She enjoys excellent collaboration with National, International institutions and industry. She was a visiting Academic at Northumbria University, UK. She organized several workshops and competitions related to computer vision and medical image analysis. She was selected as a participant in Current and Future Executive Leaders Program at Qatar Leadership Centre QLC (2012-2013) established in 2008 by an Emiri Decree.  She published extensively in computer vision and pattern recognition. She is a principal investigator of several funded research projects generating approximately five million dollars in the last years. She attended workshops related to higher education strategy, assessment methods, and interactive teaching. She published and delivered workshops on teaching programming for undergraduate students. She supervised students through research projects related to community and industry. In 2015 she was elected as IEEE Chair for Qatar section.

Dr. Osama Halabi
Osama Halabi has been active in the academia since last 17 years. Presently, he is working as an assistant professor in the department of Computer Science at Qatar University. Prior to joining Qatar University, he has participated in various organizations in various capacities such as Fujitsu Endowed Chair (Fujitsu Co.,) at Japan Advanced Institute of Science and Technology from 2001 to 2003, researcher in Virtual Systems Laboratory at Gifu University, Japan, from 2003 to 2006, assistant professor at Iwate University, Japan, from 2006 to 2010. He received M.Sc. degree in computer science from Shanghai University, and Ph.D. degree in Information Science from Japan Advanced Institute of Science and Technology (JAIST) in 1998, and 2001, respectively. His principal research interests include haptics, virtual reality (VR), augmented reality (AR), human-centered computing, robotics, interactive systems, laser graphics, and computer graphics. He has intensive experience in software development for haptic interfaces and virtual reality especially for medical training and simulation. Dr. Halabi has participated in many QNRF and Qatar university research projects and published more than 50 refereed technical papers in various international conferences and journals, three books, and one patent. Dr. Halabi was a recipient of the IEEE Information and Communication Systems Best Conference Paper Award in 2017, and many awards in prestigious technology completions such as Microsoft Imagine Cup. He is a member of IEEE, ACM, Virtual Reality Society of Japan (VRSJ), and The Society for Art and Science in Japan.