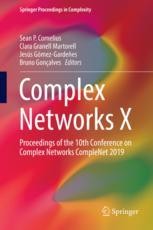 Proceedings of the 10th Conference on Complex Networks CompleNet 2019

This book aims to bring together researchers and practitioners working across domains and research disciplines to measure, model, and visualize complex networks. It collects the works presented at the 10th International Conference on Complex Networks (CompleNet) in Taragona, Spain, March, 2019. With roots in physical, information and social science, the study of complex networks provides a formal set of mathematical methods, computational tools and theories to describe, prescribe and predict dynamics and behaviors of complex systems. Despite their diversity, whether the systems are made up of physical, technological, informational, or social networks, they share many common organizing principles and thus can be studied with similar approaches. This book provides a view of the state-of-the-art in this dynamic field and covers topics such as group decision-making, brain and cellular connectivity, network controllability and resiliency, online activism, recommendation systems, and cyber security.  This text will appeal to students and researchers in the field.

​Sean P. Cornelius received his undergraduate degree from the University of Wisconsin-Madison (Madison, WI, USA), and his Ph.D. at Northwestern University (Evanston, IL, USA), both in physics. He is currently a research scientist at the Network Science Institute (NetSI) of Northeastern University and a visiting researcher at the Channing Division of Network Medicine of Harvard Medical School (Boston, MA, USA). His research focuses on nonlinear dynamics on networks. Specifically, he is interested in the topics of cascading failures, network control, and dynamical models for emergent phenomena, with applications to food webs, infrastructure systems, and subcellular networks.
Clara Granell Martorell (Barcelona, 1988) is a Visiting Assistant Professor at the Department of Computer Science and Engineering in the Universitat Rovira i Virgili, Tarragona, Spain.
She studied Computer Science at the Universitat Rovira i Virgili (Tarragona), where she graduated with honors. She took a MsC in Artificial Intelligence at the Universitat Politècnica de Catalunya (Barcelona). She started researching on Complex Networks and defended her PhD on the Physics of Multilayer networks, in Universitat Rovira i Virgili. She was awarded with a James. S. McDonnell Foundation Postdoctoral Fellowship, and received the award 'Premi Donatic Revelació 2017', a recognition for women doing research in ICT in Catalunya. She moved to the United States to join the Department of Mathematics of the University of North Carolina at Chapel Hill. She later joined the Universitat de Barcelona, in a joint appointment for the Department of Physics of the Condensed Matter and UBICS (Universitat de Barcelona Institute of Complex Systems). She received a ‘Juan de la Cierva-Formación’ postdoctoral fellowship. Currently, she is a Visiting Assistant Professor at Universitat Rovira i Virgili, where she devotes her time between research and teaching in Computer Science.
Jesús Gómez-Gardeñes (Zaragoza, 1979) received a degree in Physics from the University of Zaragoza, Spain, and a Ph.D. in Science (Physics) from the same University. After some postdoctoral periods he returned to the University of Zaragoza as “Ramón y Cajal” senior researcher where he is currently Associate Professor and head of the Group of Theoretical & Applied Modeling (GOTHAM) at the Institute for Biocomputation and Physics of Complex Systems (BIFI). His main fields of research are network science, statistical physics, and nonlinear dynamics. Within these disciplines he has mainly focused in the study of the emergence of collective phenomena out of nonlinearity and the structure of interactions in complex systems. His work was recognized by the Royal Physical Society of Spain with the prize Best Young Researcher in Theoretical Physics.
Bruno Gonçalves is currently a Vice President in Data Science and Finance at JPMorgan Chase. Previously, we was a Data Science fellow at NYU's Center for Data Science while on leave from a tenured faculty position at Aix-Marseille Université. Since completing his PhD in the Physics of Complex Systems in 2008 he has been pursuing the use of Data Science and Machine Learning to study Human Behavior. Using large datasets from Twitter, Wikipedia, web access logs, and Yahoo! Meme he studied how we can observe both large scale and individual human behavior in an obtrusive and widespread manner. The main applications have been to the study of Computational Linguistics, Information Diffusion, Behavioral Change and Epidemic Spreading.