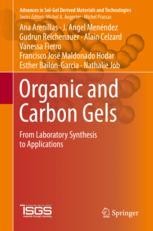 From Laboratory Synthesis to Applications

This expert volume provides specialized coverage of the current state of the art in carbon gels. Carbon gels represent a promising class of materials with high added value applications and many assets, like the ability to accurately tailor their structure, porosity, and surface composition and easily dope them with numerous species. The ability to obtain them in custom shapes, such as powder, beads, monoliths, or impregnated scaffolds opens the way towards numerous applications, including catalysis, adsorption, and electrochemical energy storage, among others. Nevertheless, it remains a crucial question as to which design synthesis and manufacturing processes are viable from an economic and environmental point of view. The book represents the perspectives of renowned specialists in the field, specially invited to conduct a one-day workshop devoted to carbon gels as part of the 19th International Sol-Gel Conference, SOL-GEL 2017, held on September 3rd, 2017 in Liège, Belgium.

Addressing properties and synthesis through applications and industry outlook, this book represents essential reading for advanced graduate students through practicing researchers interested in these exciting materials.

Ana Arenillas holds a doctorate degree in Chemical Engineering from the University of Oviedo, Spain (1999). She is Research Scientist at INCAR-CSIC in Spain, and head of the research group Microwaves and Carbons for Technological Applications (MCAT). Her research activity is focused on carbon materials, especially organic and carbon xerogels, and their use in solving energy and environmental issues. She is co-author of more than 200 peer-reviewed papers, chapters, and patents and is co-founder of SME Xerolutions Ltd.

J. Angel Menéndez Díaz graduated from the University of Oviedo, Spain, where he received his M.Sc. in Chemistry and Ph.D. in Chemical Engineering in 1988 and 1994, respectively. He then worked as a research assistant at Penn State University, USA (1995-1996). In 1997 he joined INCAR-CSIC, Spain, where he currently works as a scientific researcher. His research activity is mainly focused on carbon materials and the use of microwave heating as applied to industrial processes. He leads various research projects in these fields. Díaz is author or co-author of more than 200 scientific publications and 10 patents. He is founding Editor of the GEC Bulletin and co-founder of SME Xerolutions Ltd.

Alain Celzard graduated with a degree in Chemical Physics in 1992 and received his Ph.D. in materials science in 1995 in Nancy (France). Since 2005 he has been a full-time professor at ENSTIB engineering school (Epinal). In 2010 he was appointed Junior member of the Institut Universitaire de France. His scientific interests lie with disordered, porous and related materials, ranging from composites and nanoporous adsorbents to macroporous solid foams through gels, with applications in catalysis, depollution, energy, and gas storage.

Vanessa Fierro graduated in Chemistry at the University of Zaragoza, Spain and holds a doctorate degree in Sciences from the same university (1998). After working several years as a researcher in France (IFP Energies Nouvelles – Solaize and IRCE – Villeurbanne) then in Spain (URV - Tarragona), she is now CNRS research Director and head of the Bio-Sourced Materials research group at Institute Jean Lamour. Her present research deals with the preparation, characterization, and applications of porous solids. She is co-author of more than 200 peer-reviewed papers.

Gudrun Reichenauer obtained her Ph.D. in Physics at the University of Würzburg, Germany. She pursued her career as a Research Associate first at the Bavarian Center for Applied Energy Research (ZAE Bayern) and the Physics Department of the University of Würzburg (1993-1998), then at Princeton University and Princeton Materials Institute (NJ, USA, 1999-2000). Since 2000, she has led the Nanomaterials Group at ZAE Bayern. Her scientific interests lie in identification of nanoeffects for use in energy related fields, synthesis of well scalable nanomaterials for applications in energy technology, and development of novel or adjusted methods for fast and artifact-free characterization of nanoporous materials.

Francisco José Maldonado-Hódar obtained his Ph.D. in Chemistry with distinction from the University of Granada, Spain in 1993, where he was a member of the Group of Research in Carbon Materials and received an Extraordinary Doctorate Award. In 2012, he returned to the University as a Full Professor in the Inorganic Chemistry Department. His primary research interest is in the areas of Carbon Materials and Heterogeneous Catalysis for the purpose of developing materials with fitted physicochemical properties to be used as adsorbents, molecular sieves, and heterogeneous catalysts in processes relating to environmental protection, clean energy, and fine chemistry. Maldonado-Hódar is co-author of more than 130 highly cited manuscripts (h=34), as well as book chapters and patents.

Esther Bailόn-Garcia obtained her Ph.D. in Chemistry with distinction in the area of materials design for catalytic and photocatalytic applications from the University of Granada, Spain in 2015. The quality of her work has been recognized through the awarding of the Young Researchers Award from the Spanish Carbon Group and the Extraordinary Doctorate Award from the University of Granada. After postdoctoral stays at the University of Trieste, Italy and the Instituto Superior Técnico of Lisbon, Portugal, she earned a postdoctoral position (Juan de la Cierva fellow) at the University of Alicante, Spain in the Department of Inorganic Chemistry, where she currently works on materials design for environmental and clean energy applications.

Nathalie Job received her Ph.D. in Chemical Engineering from the University of Liège, Belgium in 2006. Her thesis work, dedicated to carbon gels for applications in heterogeneous catalysis, evolved towards carbon-supported electrocatalysts for fuel cells during her post-doctoral fellowship (F.R.S.-FNRS). Since 2014, she has held the position of Associate Professor in the Department of Chemical Engineering (NCE group) at the University of Liège. Her research now deals with electrochemical devices such as fuel cells, batteries, and supercapacitors from materials synthesis to the building of complete systems.