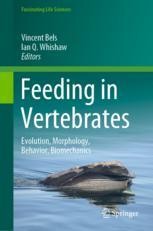 This book provides students and researchers with reviews of biological questions related to the evolution of feeding by vertebrates in aquatic and terrestrial environments. Based on recent technical developments and novel conceptual approaches, the book covers functional questions on trophic behavior in nearly all vertebrate groups including jawless fishes. The book describes mechanisms and theories for understanding the relationships between feeding structure and feeding behavior. Finally, the book demonstrates the importance of adopting an integrative approach to the trophic system in order to understand evolutionary mechanisms across the biodiversity of vertebrates.

Vincent Bels was born in Verviers, Belgium. His Ph.D. in Ethology and Functional Morphology at the University of Liège (Liège, Belgium) integrated theoretical concepts on morphology in feeding animals. He has used lizards as a model to clarify the process of behavioral ritualization in evolution. After completing his studies, he served as a Research Fellow and then Assistant at the University of Liège (Belgium). He then taught Biology, Zoology and Ecology and developed applied research methods for studying feeding behavior in domestic animals at the Hautes Ecoles (Hainaut, Belgium) and the Associated Agronomic Centre (Belgium). He is currently a Professor at the Muséum National d’Histoire Naturelle (Paris, France), where he has served as joint director of one Research Mixed Unit (CNRS/MNHN, France). He has taught Functional Morphology at the University of Mons (Belgium). Professor Bels belongs to the Scientific Committee of the Muséum National d’Histoire Naturelle (Paris, France), and serves in Scientific Sections of the Centre National de Recherche Scientifique (CNRS, France). He has authored over 90 peer-reviewed articles, 10 book chapters, and 6 books on feeding and locomotion in vertebrates. In 1994, he edited “Biomechanics of Feeding in Vertebrates” in the series Advances in Comparative and Environmental Physiology (volume 18) published by Springer. Professor Bels’ research chiefly focuses on feeding, drinking and displays in lizards, turtles and birds, but he has also studied feeding and the relation between feeding and locomotion in vertebrates. His research goal is to integrate behavioral, physiological and morphological science into a comprehensive understanding of the “Form-Function” relationship of the trophic system in vertebrates.