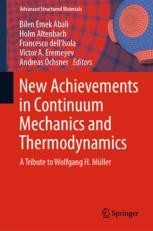 A Tribute to Wolfgang H. Müller

Over 50 of Prof. Müller’s friends and colleagues contributed to this book, which commemorates his 60th birthday and was published in recognition of his outstanding contributions.

Prof. Dr.-Ing. habil. Dr.h.c. mult. Holm Altenbach is Member of the International Research Center on Mathematics and Mechanics of Complex Systems (M&MoCS), Italy and International Association of Applied Mathematics and Mechanics (GAMM). In 1996, he was appointed as a full professor (Engineering Mechanics) at the Martin Luther University Halle-Wittenberg. Since 2011, he is a full professor at the Otto-von-Guericke-University Magdeburg. He graduated from Leningrad Polytechnic Institute in 1980 (diploma with a distinction). He defended his Ph.D. in 1983 at the same university, where he obtained the habilitation in 1987.

His areas of scientific interest include:

He is one of the Editors-in-Chief of Journal of Applied Mathematics and Mechanics / Zeitschrift für Angewandte Mathematik und Mechanik (the oldest journal in Mechanics in Germany) and of Springer’s Advanced Structured Materials series. He is a member of the editorial board of the following journals: Continuum Mechanics and Thermodynamics, Technische Mechanik, Mechanics of Composite Materials and Journal of Strain Analysis for Engineering Design.

He was awarded the Polish Humboldt Prize in 2018.

Bilen Emek Abali has studied and worked in different continents. Currently, he is working as a postdoctoral associate at the Technische Universitaet Berlin in Germany. Among others he has been lecturing in mechanics, composite materials, numerical methods, and multiphysics simulations at different universities. Dr. Abali’s research endeavors are about thermodynamical derivation of governing equations and their computation in engineering systems especially in multiphysics applications. With distinguished scientists in several countries, he has been working in analytical solutions for verifying computations of heterogeneous materials in solids, developing and validating novel numerical solution strategies for multiphysics including fluid–structure interaction and coupled electromagneto-thermomechanical systems, investigating further theoretical methods in describing metamaterials with inner substructure, studying fatigue-related damage in metal alloys, working in mechanochemistry for a theoretical description of stresses in batteries, and also developing inverse analysis methods to characterize soft matter. For all computations, he utilizes and develops open-source packages and makes all codes publicly available in order to encourage scientific exchange.

Prof. Francesco dell’Isola - Università di Roma – Sapienza, Università degli Studi dell’Aquila
Bio: Professor Francesco dell’Isola holds the Chair of Mechanics of Structures at University of Rome "La Sapienza", Italy. He holds a degree in Physics and a Ph.D. in Mathematical Physics from Università Federico II of Naples, Italy. He is a mathematical physicist with a long experience in Continuum Mechanics, Mechanics of Solids and Structures and Vibration Control. He holds the United States Patent 6546316 (together with Vidoli and Henneke) and is co-author of more than 150 manuscripts appeared on peer reviewed international journals. He is scientific responsible of the Laboratorio Strutture e Materiali Intelligenti in Cisterna di Latina (Italy) and is Member of the "Collegio dei Docenti" of the Doctoral School in Theoretical and Applied Mechanics Università di Roma La Sapienza and the Director of the Research Center M&MoCS, University of  L’Aquila (since 2016). He was nominated as Membre du Conseil scientifique de l’Institut des sciences de l’ingénierie et des systèmes – CNRS (2014-2018). Finally, he is Member of the Editorial Board of 12 International Journals and was also Member of the Scientific Committee of 24 International Conferences and Schools and was invited to hold more than 98 seminars or lectures in Europe and USA.

Andreas Öchsner is Full Professor of lightweight design and structural simulation at the Esslingen University of Applied Sciences, Germany. Having obtained a Diploma Degree (Dipl.-Ing.) in Aeronautical Engineering at the University of Stuttgart (1997), Germany, he spent the time from 1997 to 2003 at the University of Erlangen-Nuremberg as a research and teaching assistant to obtain his Doctor of Engineering Sciences (Dr.-Ing.). From 2003 to 2006, he worked as Assistant Professor in the Department of Mechanical Engineering and Head of the Cellular Metals Group affiliated with the University of Aveiro, Portugal. He spent seven years (2007–2013) as a Full Professor in the Department of Applied Mechanics, Technical University of Malaysia, where he was also Head of the Advanced Materials and Structure Lab. From 2014 to 2017 he was a Full Professor at the School of Engineering, Griffith University, Australia and Leader of the Mechanical Engineering Program (Head of Discipline and Program Director). His research interests are related to experimental and computational mechanics, cellular metals and thin structures and interphases. He has published over 450 scientific publications, comprising 13 research monographs, 23 book chapters and four teaching books on finite element methods. He obtained more than 3000 citations in Google Scholar. He is the general chairman of 12 international conferences on computational and experimental engineering (ACE-X series) and 14 international conferences in the area of heat and mass transfer (DSL series). His editorial work comprises posts as Editor-in-Chief of the international journal Continuum Mechanics and Thermodynamics (Springer), Editor-in-Chief of the Springer book series on Advanced Structured Materials and Editor of SpringerBriefs in Applied Sciences and Technology: Computational Mechanics. His research activities were recognized in 2010 by the award of a higher doctorate degree (D.Sc.) by the University of Newcastle, Australia.

Prof. Dr. hab. Victor A. Eremeyev is Member of American Mathematical Society; the International Research Center on Mathematics and Mechanics of Complex Systems (M&MoCS), Italy; and Polish Society of Theoretical and Applied Mechanics. His employment history includes positions at Rostov State University/South Federal University, Don State Technical University, and Southern Scientific Center of Russian Academy of Science, Rostov on Don, at Research Institute for Mechanics, National Research Lobachevsky State University of Nizhni Novgorod, Russia; at Martin Luther University Halle-Wittenberg and Otto-von-Guericke-University Magdeburg, Germany; at Rzeszow University of Technology, Rzeszów; and Gdańsk University of Technology, Gdańsk, Poland. He graduated from Rostov State University in 1985 (diploma in Mechanics with a distinction). He defended Ph.D. in Rostov State University in 1990 (title: The stability of two-phase nonlinear thermo-elastic bodies). He was awarded Dr. hab. (Doctor of Science of Physics & Mathematics) in 2004 at Institute of Problems of Mechanical Engineering of Russian Academy of Science, Saint-Petersburg, Russia (title: Mechanics of two-phase bodies with microstructure under finite deformations).

His areas of scientific interest include:

•       Theory of plates and shells with applications.

•       Nano- and micromechanics. He is the Author/Editor of 12 books written in Russian/English/Spanish, author/co-author of ca. 150 scientific peer-reviewed papers indexed by Scopus/Web of Science. He is also a member of editorial board of the following journals: Journal of Applied Mathematics and Mechanics (ZAMM); Mathematics and Mechanics of Solids; Acta Mechanica; Technische Mechanik; Nanoscience and Technology: An International Journal; PNRPU Mechanics Bulletin. He was awarded the International Prize “Tullio Levi-Civita” for the Mathematical and Mechanical Sciences — 2018.