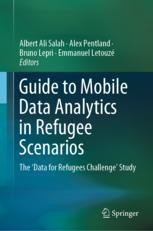 The 'Data for Refugees Challenge' Study

After the start of the Syrian Civil War in 2011–12, increasing numbers of civilians sought refuge in neighboring countries. By May 2017, Turkey had received over 3 million refugees — the largest refugee population in the world. Some lived in government-run camps near the Syrian border, but many have moved to cities looking for work and better living conditions. They faced problems of integration, income, welfare, employment, health, education, language, social tension, and discrimination. In order to develop sound policies to solve these interlinked problems, a good understanding of refugee dynamics isnecessary.

This book summarizes the most important findings of the Data for Refugees (D4R) Challenge, which was a non-profit project initiated to improve the conditions of the Syrian refugees in Turkey by providing a database for the scientific community to enable research on urgent problems concerning refugees. The database, based on anonymized mobile call detail records (CDRs) of phone calls and SMS messages of one million Turk Telekom customers, indicates the broad activity and mobility patterns of refugees and citizens in Turkey for the year 1 January to 31 December 2017. Over 100 teams from around the globe applied to take part in the challenge, and 61 teams were granted access to the data.This book describes the challenge, and presents selected and revised project reports on the five major themes: unemployment, health, education, social integration, and safety, respectively. These are complemented by additional invited chapters describing related projects from international governmental organizations, technological infrastructure, as well as ethical aspects. The last chapter includes policy recommendations, based on the lessons learned.

The book will serve as a guideline for creating innovative data-centered collaborations between industry, academia, government, and non-profit humanitarian agencies to deal with complex problems in refugee scenarios. It illustrates the possibilities of big data analytics in coping with refugee crises and humanitarian responses, by showcasing innovative approaches drawing on multiple data sources, information visualization, pattern analysis, and statistical analysis.It will also provide researchers and students working with mobility data with an excellent coverage across data science, economics, sociology, urban computing, education, migration studies, and more.

Dr. Albert Ali Salah is affiliated with the Computer Engineering Department at Boğaziçi University, Turkey, and with Department of Information and Computing Sciences at Utrecht University, the Netherlands. He has co-authored over 150 publications on multimodal interfaces, pattern recognition, computer vision, and computer analysis of human behavior. Dr. Salah has received the inaugural EBF European Biometrics Research Award (2006), BUVAK Award of Research Excellence (2014), and the BAGEP Award of the Science Academy (2016). He is a Senior Member of the IEEE, and a member of the ACM.

Prof. Alex ‘Sandy’ Pentland directs MIT’s Human Dynamics Laboratory and the MIT Media Lab Entrepreneurship Program, co-leads the World Economic Forum Big Data and Personal Data initiatives, and is a member of the advisory boards for Nissan, Motorola Mobility, Google, Telefonica, and a variety of start-up firms. He has previously helped create and direct MIT’s Media Laboratory, the Media Lab Asia laboratories at the Indian Institutes of Technology, and Strong Hospital’s Center for Future Health. In 2012 Forbes named Sandy one of the ‘seven most powerful data scientists in the world’, along with Google founders and the CTO of the United States. His research has been featured in Nature, Science, and Harvard Business Review, as well as being the focus of TV features on BBC World, Discover and Science channels.

Dr. Bruno Lepri is the Research Director of the Mobile and Social Computing Lab (MobS Lab) at Fondazione Bruno Kessler (FBK), Trento, Italy. Bruno is also the Head of Research of Data-Pop Alliance, the first think-tank on big data and development co-created by the Harvard Humanitarian Initiative, MIT Media Lab, Overseas Development Institute, and Flowminder to promote a people-centered big data revolution. In 2010 he won a Marie Curie post-doctoral fellowship and he has held post-doc positions at MIT Media Lab and FBK. He also serves as consultant of several companies and international organizations. Recently, he co-founded Profilio, a startup active in the field of AI-driven computational marketing. His research has received attention from several international press outlets and obtained several prizes.

Dr. Emmanuel Letouzé is the Director and co-Founder of Data-Pop Alliance, a coalition on big data and development co-created in 2013 by the Harvard Humanitarian Initiative (HHI), MIT Media Lab, and Overseas Development Institute (ODI), and joined in 2016 by the Flowminder Foundation as its 4th core member. He is a Visiting Scholar at MIT Media Lab, a Research Affiliate at HHI and a Research Associate at ODI. He is the author of the UN Global Pulse’s White Paper “Big Data for Development” (2012) and of the 2013 and 2014 OECD Fragile States reports. His research and work focuses on big data applications and implications for official statistics, poverty and inequality, conflict, crime, and fragility, climate change, vulnerability and resilience, and human rights, ethics, and politics.

Dr. Yves-Alexandre de Montjoye is an Assistant Professor at Imperial College London, where he heads the Computational Privacy Group. His research aims to understand how the unity of human behavior impacts the privacy of individuals – through re-identification or inference – in rich high-dimensional datasets such as mobile phone, credit card, or browsing data. Yves-Alexandre was recently named an Innovator under 35 for Belgium (TR35). His research has been published in Science and Nature SRep. and covered by the BBC, CNN, New York Times, Wall Street Journal, Harvard Business Review, Le Monde, Die Spiegel, Die Zeit, and El Pais, as well as in his TEDx talks. His work on the shortcomings of anonymization has appeared in reports of the World Economic Forum, United Nations, OECD, FTC, and the European Commission. Before coming to MIT, he was a researcher at the Santa Fe Institute in New Mexico.

Dr. Xiaowen Dong is a Departmental Lecturer in the Department of Engineering Science, a faculty member of the Oxford-Man Institute, and a research fellow of Somerville College, all at the University of Oxford. He is primarily interested in developing novel techniques that lie at the intersection of machine learning,  signal processing, and game theory in the context of networks, and applying them to study questions across social and economic sciences, with a particular focus on understanding human behaviour, decision making and societal changes.

Dr. Patrick Vinck is the Research Director of the Harvard Humanitarian Initiative.  He is assistant professor at the Harvard T.H. Chan School of Public Health and Harvard Medical School. His current research examines resilience, peacebuilding, and social cohesion in contexts of mass violence, conflicts and natural disasters. This research has lead him to examine the use and ethics of data and technology in the field. He is the co-founder and director of KoBoToolbox a data collection service, and the Data-Pop Alliance, a Big Data partnership with MIT and ODI. He serves as a regular advisor and evaluation consultant to the United Nations and other agencies.