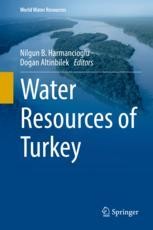 This book provides an in-depth description of water resources of Turkey, a country with a unique geographical location, extending from the Mediterranean in Europe to the Middle East. Its varying geography, topography, hydrology, geology and climate are reflected in the diverse characteristics of its water basins. Furthermore, due to its geographical location, Turkey has a significant number of transboundary river basins and has to share its water resources with its neighbors, an issue that can sometimes lead to water conflicts.

Turkey is also an interesting example of a developing country that is attempting to adapt to universal water management strategies while at the same time facing legal, institutional, economic and capacity development problems. It has long remained a water-rich country, but the situation is now changing due to the increasing population, inefficient use of resources, and the impacts of climate change and environmental degradation.

This book is useful for national and international organizations as well as water resources professionals. It takes on an added significance in the light of climate change in the region, water management problems and transboundary water basins.

Prof.Dr. Nilgun B. Harmancioglu, a Professor of Hydrology and Water Resources, was actively involved in teaching and research at DEU Faculty of Engineering from 1976 to 2017 (formerly the Aegean University from1976 to 1982). She received her BSc. in Civil Engineering in 1973, MSc. in Water Resources Engineering in 1976, and her PhD. in Hydrology and Water Resources in 1981. She was promoted to full Professor at DEU Faculty of Engineering Civil Engineering Department in 1992. She pursued her post-doctoral studies first at Ecole National Superieure des Mines de Paris, Centre d'Informatique Geologique, Laboratoire d'Hydrogeologie Mathematique Paris, (1980-1981), and then at George Washington University, School of Engineering and Applied Science, International Water Resources Institute (1984-86), where she also worked as a research associate.Dr. Harmancioglu's basic areas of research are water resources management, simulation of hydrologic processes and information theory as applied to water resources, and she has published over 350 articles in these areas, 70% of which are in English. She has also published and edited 4 books and has contributed to several international conferences and symposia as a co-director, lecturer and member of organization committees She has been involved in various research projects funded by NATO, IWMI, the British Council, EU Framework Programs the State Planning Agency, DEU, and TUBITAK (Scientific and Technical Research Council of Turkey). She was also a member of the Theme Advisory Board for the UNESCO IHP-VI Program between 2002 and 2007. She was awarded distinguished membership of the EWRA (European Water Resources Association) in 2015 for her sustained and outstanding contributions to the scientific field of water resources management, and her continuous service to society.Dr. Harmancioglu was the Director of SUMER (DEU Water Resources Management Research & Application Center) between 2001 and 2017, and is currently the scientific director of EA-TEK, the International R&D, Engineering, Software and Consultancy Company located at the Technopark of Dokuz Eylul University, where she is continuing her research and project activities.
Prof. Dr. Dogan Altinbilek is an adjunct Professor of Water Resources Engineering at the Middle East Technical University, Ankara, Turkey. After receiving his B.S. degree in Civil Engineering from the Middle East Technical University (METU) in Ankara, Turkey in 1965, he received his M.S. and Ph.D. degrees in Civil Engineering from Georgia Institute of Technology, USA. Since 1970, he has held posts at the Middle East Technical University of Turkey and King Abdulaziz University of Saudi Arabia.  From 1996 to 2001, he was the Director General of State Hydraulic Works (DSI), which is the major government agency in Turkey responsible for water resources development, including water supply to large cities. From 2005 to 2009, Prof. Altinbilek was appointed a President of Energy Group at IC Holding, Ankara, Turkey and also as Chairman of the Board of AES-IC Ictas Energy Production Company. Currently, he is a Governor and Vice President of World Water Council (WWC). Prof. Dogan Altinbilek was also the President of International Water Resources Association (IWRA) for the period 2013-2015. He is also an Honorary Member and was President of International Hydropower Association (IHA) for the period 2004-2008.