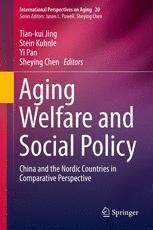 China and the Nordic Countries in Comparative Perspective

This perceptive volume presents conceptual, theoretical, and empirical approaches to social policy analysis comparing China and Nordic countries in their treatment of the elderly. An international panel of experts offers valuable policy insights into issues of housing, community care, family care, pensions and social security, and mental health as China translates and adapts Western examples, particularly those set by Norway, Sweden, and Finland. The book contrasts shared issues in the contexts of economic history, accountability and service improvements, and sustainability while also examining specifically Chi nese problems such as care gaps between urban and rural elders. Coverage also considers the centrality of aging policy in China as the nation works toward its long-term goal of eradicating poverty.

Included among the topics:

PAN Yi, Ph.D., is Professor and Senior Researcher in the Institute of Sociology at the Chinese Academy of Social Sciences (CASS), Beijing, the deputy general secretary of Social Policy Center of CASS, and deputy general secretary of Social Welfare Academical Association of China, the director of Sino-Nordic Welfare Laboratory in CASS and a member of the Committee of China Charity Alliance, an expert member of Council in China Association of Gerontology. She received her PhD (Social and Political Sciences) from University of Cambridge (UK), MSSc (social policy) in Tampere University (Finland), and BA in Peking University (China). Sheying Chen, Ph.D., is Professor of Social Policy and former Assoc. Provost for Academic Affairs at Pace University, USA, and honorary Director for Social Work Study at Tsinghua University, China. Previously, he served at Indiana University Southeast as Professor and Associate Vice Chancellor for Academic Affairs, and University of Guam as Professor and Dean of the College of Professional Studies. He held tenure as Chair and Professor at City University of New York, College of Staten Island, and was on the permanent faculty as Coordinator for Graduate Studies at Sun Yat-sen University, Guangzhou. He received his Ph.D. and MSW from University of California, Los Angeles, and M.A. in sociology from Sun Yat-sen University and an undergraduate diploma from Changsha Technological College (now part of Central-South University), China.
Show all