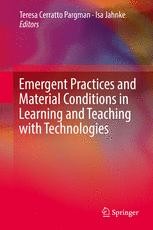 Emergent Practices and Material Conditions in Learning and Teaching with Technologies

This book explores the complexities of interacting with digital technologies in the everyday flow of practices in schools, museums, and the home. In particular, the authors pay attention to the material conditions of such practices via the exploration of media discourses on information and communication technologies in the classroom; the ongoing digitization of the school; the use of video chat for language learning; the instantiation of CrossActionSpaces in an urban science classrooms; the development of symbolic technologies such as the Carbon Footprint Calculator; the design of apps and virtual museums for learning science; the use of text message tools for collaborative learning in teacher education and the design, implementation, and evaluation of Augmented Reality apps in outdoor learning. The book is grounded in case studies presented by scholars at the workshop, “Changing Teaching and Learning Practices in Schools with Tablet-Mediated Collaborative Learning: Nordic, European and International Views” and the workshop “Emergent Practices and Material Conditions in Tablet-mediated Collaborative Learning and Teaching” both of which have been held at the Computer-Supported Collaborative Learning conference (CSCL). This volume brings together inspirational and high-quality chapters that raise a range of important ideas and showcase the importance of looking beyond technology-enhanced learning. Taken together, this volume unpacks a variety of everyday situations by engaging with what is really happening with digital technologies rather than what is expected to happen with them in educational settings. The take-away message is a call for research on learning, teaching, and digital technologies that enables engagement with the materiality of educational practices and, in particular, their constitutive relationships that configure the contemporary educational practices of the digital age.

Dr. Teresa Cerratto Pargman is an Associate Professor of Human-Computer Interaction (HCI) in the Department of Computer and Systems Sciences at Stockholm University in Sweden. Since 2016, she has been the Head of the Interaction Design and Learning Research Unit at this university. Her research is situated within the field of HCI and seeks to contribute to the study of how digital technologies reflect and configure established practices and how emergent practices shape the development and design of contemporary technologies. In this field, Dr. Cerratto Pargman has aimed to contribute to issues that are central to technology enhanced learning, computer-supported collaborative learning, and sustainable HCI. She leads and participates in several national and international research projects. Most recently, she led the Purposeful Learning Across Collaborative Educational Spaces project in Stockholm, which was funded by the Swedish Research Council during 2013–2016. Currently, she is participating in the EU Ground Truth 2.0 project, which is focused on the topic of the co-design of sociotechnical platforms and citizen science (2017–2019), and in the ongoing regional project Make IT Happen, which focuses on programming and computational thinking. Her website is http://teresacerrattopargman.blogs.dsv.su.se

Dr. Isa Jahnke is an Associate Professor at the School of Information Science and Learning Technologies, University of Missouri, Columbia, USA.  From 2008 to 2011, she was an Assistant Professor at TU Dortmund, Germany, and, from 2011 to 2015, a Professor at Umeå University, Sweden. Since 2015, Isa Jahnke is the Director of the Information Experience Lab (IE Lab) at the University of Missouri, a usability and user experience (UX) lab: ielab.missouri.edu. Her research projects focus on learning with technologies. She received awards and grants as a professor in Germany, Sweden, and the USA. In Germany, she led the creativity study of the DaVinci project funded by the German Ministry of Research and Education. She was the Project Leader of the European project called PeTEX, “Platform for E-learning and Telemetric Experimentation,” in manufacturing engineering across three countries, Sweden, Italy, and Germany, which was funded by the European Union. She was the Principal Investigator (PI) of “Digital Didactical Designs” (2014–2016) funded by the Swedish Research Council, in which the team studied tablet/iPad classrooms. In 2016–2017, she led a project of “learning expeditions” to study students as designers for learning (MU Interdisciplinary Innovations Fund). Dr. Jahnke received a US National Science Foundation award (2018–2020) as the Co-PI for studying cybersecurity practices and developing material for educators (PI is Dr. Prasad Calyam). Dr. Jahnke has 110 publications and has made 13 keynote speeches, including one in Norway in 2018 attended by 1400 teachers and school leaders. Her website is www.isa-jahnke.com.