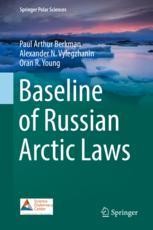 This book is the first comprehensive and authoritative translation into English of national and international laws of Russia that relate to the Arctic from the early 19th century to the present, revealing the historical and current context of sovereignty, sovereign rights and jurisdiction across nearly half of the north polar region. The Russian original version was coordinated by Igor Sergeyevich Ivanov, former Foreign Minister of the Russian Federation and currently the President of the Russian International Affairs Council.This unique translation complements all legal, geopolitical and governance analyses of the Arctic as a primary source of information, without interpretation or bias. The Baseline of Russian Arctic Laws is a treasure trove for diplomats, scholars and students who are involved with the international environmental, economic and societal dynamics of the Arctic, balancing national interests and common interests to achieve sustainability of the high north for the benefit of all across generations in our globally-interconnected civilization.

Science Diplomat, Oceanographer, Polar Explorer and Global Thought Leader Professor Paul Arthur Berkman is building connections between science, diplomacy and information technology to promote cooperation and prevent discord, balancing national interests and common interests for the benefit of all on Earth. He was a visiting professor at the University of California at the age of 23, after wintering the previous year in Antarctica on a SCUBA research expedition, evolving two decades later into a textbook on Science Into Policy. He was a Fulbright Distinguished and Head of the Arctic Ocean Geopolitics Programme at the University of Cambridge, chairing the Antarctic Treaty Summit at the Smithsonian Institution in 2009 with legacy through the first book on Science Diplomacy and then the first formal NATO-Russia dialogue the following year regarding Environmental Security in the Arctic Ocean with legacy contributions through a successful Springer publication of the same name. He currently coordinates the Arctic Options and Pan-Arctic Options projects (involving support from national science agencies in the United States, Russian Federation, Norway, France, China and Canada from 2013-2020) as well as a Carnegie Corporation project on US-Russia Relations. In September 2015, he joined the Fletcher School of Law and Diplomacy at Tufts University as Professor of Practice in Science Diplomacy and is now Director of the Science Diplomacy Center as a university-wide initiative. For his interdisciplinary research and publications, including the November 2017 policy forum published in Science on Arctic Science Agreement Propels Science Diplomacy, as well as other contributions, Prof. Berkman has received many awards nationally and internationally, most recently the Vernadsky Medal from the Russian Academy of Natural Sciences in 2017.

Oran R. Young is professor emeritus and co-director of the Program on Governance for Sustainable Development at the Bren School of Environmental Science & Management at the University of California (Santa Barbara). His research focuses on theoretical issues relating to the roles of social institutions as governance systems with applications to matters of governance relating to climate change, marine systems, and the polar regions. He also does comparative research on environmental governance in China and the United States. Dr. Young served for six years as founding chair of the Committee on the Human Dimensions of Global Change of the US National Academy of Sciences. He chaired the Scientific Steering Committee of the international project on the Institutional Dimensions of Global Environmental Change (IDGEC). He was a founding co-chair of the Global Carbon Project and from 2005 to 2010 chaired the Scientific Committee of the International Human Dimensions Programme on Global Environmental Change. An expert on Arctic issues, Dr. Young chaired the Steering Committee of the Arctic Governance Project and is the science advisor to the North Pacific Arctic Conferences. Past service in this realm includes co-chair of the Working Group on Arctic International Relations, co-chair of the NAS Committee on Arctic Social Science, member of the US Polar Research Board, founding board member of the Arctic Research Consortium of the United States, vice-president of the International Arctic Science Committee, chair of the Board of Governors of the University of the Arctic, consultant to the Standing Committee of Parliamentarians of the Arctic Region, and co-chair of the 2004 Arctic Human Development Report. He is the author or co-author of more than 30 books. His recent books include On Environmental Governance: Sustainability, Efficiency, and Equity (2013) and Governing Complex Systems: Social Capital for the Anthropocene (2017).