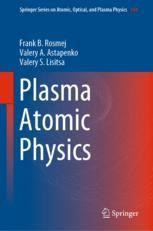 Plasma Atomic Physics provides an overview of the elementary processes within atoms and ions in plasmas, and introduces readers to the language of atomic spectra and light emission, allowing them to explore the various and fascinating radiative properties of matter.

Particular highlights include the development of quantum kinetics to a level surpassing the almost exclusively used quasi-classical approach in atomic population kinetics, the introduction of the recently developed Quantum-F-Matrix-Theory (QFMT) to study the impact of plasma microfields on atomic populations, and the Enrico Fermi equivalent photon method to develop the “Plasma Atom”, where the response properties and oscillator strength distribution are represented with the help of a local plasma frequency of the atomic electron density.

Based on courses held by the authors, this material will assist students and scientists studying the complex processes within atoms and ions in different kinds of plasmas by developing relatively simple but highly effective models. Considerable attention is paid to a number of qualitative models that deliver physical transparency, while extensive tables and formulas promote the practical and useful application of complex theories and provide effective tools for non-specialist readers.

Frank B. Rosmej is a Nationally Distinguished Professor at the Sorbonne University in Paris and is leading the research group “Atomic Physics in Dense Plasmas” at the LULI-Laboratory, Ecole Polytechnique, Palaiseau, France. Born in 1962 in Germany, he obtained his Ph.D. in 1991 and Habilitation thesis in 1998 in Physics from the Ruhr-University in Bochum, Germany. He received the Feodor Lynen award from the Alexander von Humboldt Foundation in Germany, the Eminent Scientist price from the RIKEN research center in Japan, the Kurchatov price from the National Research Center “Kurchatov Institute” in Russia and several pedagogic and research awards from the Sorbonne University; he has been an invited Professor at the University of Tokyo, University of Nagoya, University of Osaka and the Research Center RIKEN in Japan, Scholar of the Stanford University and the University of Maryland in USA; had research stays at the Los Alamos National Laboratories, Lawrence Livermore Laboratories, Max-Planck Institute for Quantum Optics. He was honored with professorships at the Excellence Universities “Moscow Institute of Physics and Technology MIPT” and the “National Research Nuclear University MEPhI” in Russia, was founding editor of “International Pedagogical Research Papers”, and President of the National French Federation of “Fusion Science”. His field of research covers experimental and theoretical atomic and plasmas physics, quantum kinetics, non-equilibrium radiative properties, magnetic and inertial fusion science, the interaction of X-ray Free Electron Lasers XFEL with dense matter, suprathermal electron generation in high energy density and ultra-high intensity lasers, plasma spectroscopy and diagnostics. He is the author of 150 research papers and has held 70 invited talks at international conferences and workshops.

Valery A. Astapenko is a Professor and principal researcher at the Moscow Institute of Physics and Technology MIPT in Dolgoprudny, Russia and is a Scientific expert of the Russian Ministry of Education Science. Born in 1959 in Russia, he obtained his Ph.D. in 1985 and Habilitation thesis in 2000 from the Moscow Institute of Physics and Technology. He has been honored with the Kurchatov Prize, the Russian Federation Government Prize in the Field of Education and twice with the Moscow Government Prize for achievements in new technologies in education. He has been an invited Professor at the University Pierre and Marie Curie and Ecole Polytechnique in France. He is the author of 9 monographs and has published more than 170 research articles. His field of research is theoretical physics of photo-processes in the field of ultra-short laser pulses and bichromatic radiation fields, interaction of radiation with matter, elementary processes in atoms and plasmas, coherent optical phenomena and polarization Bremsstrahlung.

Valery S. Lisitsa heads the Laboratory of “Radiation Theory” at the National Research Center Kurchatov Institute in Moscow and is a Professor at the Moscow Institute of Physics and Technology MIPT in Dolgoprudny and the National Research Nuclear University “MEPhI” in Russia. Born in 1945 in Russia, he obtained his Ph.D. in 1975 from the Moscow State University and his Habilitation thesis in 1979 from the Kurchatov Institute of Atomic Energy. He has been a member of the Scientific Council of Spectroscopy of the Russian Academy of Science and has been a leading research scientist of the Kurchatov Institute for more than 30 years. He has also been the deputy editor of the international Journal of Experimental and Theoretical Physics JETP and a managing director of several research projects in the Kurchatov Institute. Honored three times with the Kurchatov Prize and the best publication prize of the International Publishing Company “Nauka” he has been an invited Professor at the University of Bochum, Germany, the Universities Aix-Marseille, University Pierre and Marie Curie and the Meudon Observatory in France and the National Research Center LHD in Japan. He is the author of three monographs and 20 scientific reviews and has published more than 200 research articles. His field of research is the theory of radiation of plasmas and gases including atomic spectral line broadening, interaction of intense laser radiation with matter, X-ray spectra from hot dense plasmas, elementary collisional-radiative processes in plasmas, radiation losses, non-linear spectroscopy, and radiation transport by electromagnetic and plasma waves.