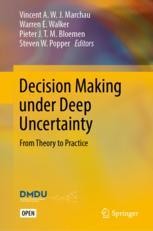 From Theory to Practice

This open access book focuses on both the theory and practice associated with the tools and approaches for decisionmaking in the face of deep uncertainty. It explores approaches and tools supporting the design of strategic plans under deep uncertainty, and their testing in the real world, including barriers and enablers for their use in practice. The book broadens traditional approaches and tools to include the analysis of actors and networks related to the problem at hand. It also shows how lessons learned in the application process can be used to improve the approaches and tools used in the design process. The book offers guidance in identifying and applying appropriate approaches and tools to design plans, as well as advice on implementing these plans in the real world. For decisionmakers and practitioners, the book includes realistic examples and practical guidelines that should help them understand what decisionmaking under deep uncertainty is and how it may be of assistance to them.
Decision Making under Deep Uncertainty: From Theory to Practice is divided into four parts. Part I presents five approaches for designing strategic plans under deep uncertainty: Robust Decision Making, Dynamic Adaptive Planning, Dynamic Adaptive Policy Pathways, Info-Gap Decision Theory, and Engineering Options Analysis. Each approach is worked out in terms of its theoretical foundations, methodological steps to follow when using the approach, latest methodological insights, and challenges for improvement. In Part II, applications of each of these approaches are presented. Based on recent case studies, the practical implications of applying each approach are discussed in depth. Part III focuses on using the approaches and tools in real-world contexts, based on insights from real-world cases. Part IV contains conclusions and a synthesis of the lessons that can be drawn for designing, applying, and implementing strategic plans under deep uncertainty, as well as recommendations for future work.
The publication of this book has been funded by the Radboud University, the RAND Corporation, Delft University of Technology, and Deltares.

Vincent A. W. J. Marchau (Radboud University (RU) – Nijmegen School of Management) holds the chair on Uncertainty and Adaptivity of Societal Systems. The chair is supported by The Netherlands Study Centre for Technology Trends (STT). He received a Ph.D. from TU Delft in 2000 for his research on technology assessment of Automated Vehicle Guidance. Marchau is also Managing Director of the Dutch Research School for Transport, Infrastructure and Logistics (TRAIL), with 100 Ph.D. students and 50 staff members across 6 Dutch universities. His research focuses on long-term planning under uncertainty in transportation, logistics, spatial planning, energy, water, and security. He has been involved as a principal researcher within various national (e.g. NWO) and international (e.g. EU) projects regarding transport innovation assessment, long-term planning and decisionmaking under uncertainty in several domains. In addition to his professorship, Marchau is a member of the editorial board of EJTIR, IET-ITS, guest-editor of different scientific journals, and fellow of the KiM Netherlands Institute for Transport Policy Analysis (KiM). For several years, Marchau has worked closely with several societal partners, including: The Ministry of Infrastructure and Water Management (organizing (a) courses for transport policymakers, and (b) projects on long-term planning); STT (on (a) foresight projects in the fields of e.g. transport, water, and energy, and (b) courses on decisionmaking under uncertainty); and the RAND Corporation/World Bank (organizing the annual workshop for decisionmaking under deep uncertainty for academics and practitioners).

Warren E. Walker is an emeritus Professor of Policy Analysis in both the faculty of Technology, Policy and Management and the Aerospace faculty at Delft University of Technology. He has a Ph.D. in Operations Research from Cornell University, and more than 40 years of experience as an analyst and project leader at the RAND Corporation, applying quantitative analysis to public policy problems at the local, regional, national, and international levels. His recent research has focused on methods for dealing with deep uncertainty in making public policies (especially with respect to climate change), improving the freight transport system in the Netherlands, and the design of decision support systems for airport strategic planning. He has led several large policy studies for the Netherlands Ministry of Transport, Public Works and Water Management, most of which have involved cost-effectiveness analyses of complex problems with multiple stakeholders in which a range of impacts of alternative policies are assessed and tradeoffs are made among the environmental, economic, and social impacts. He has been a special advisor to the Director for Freight Policy in the Netherlands Ministry of Transport, Public Works and Water Management, and has carried out strategic planning studies for that Directorate. He was a member of the Scientific Committee of a project for the European Commission that helped to design a European Transportation Information System (ETIS). He is the recipient of the 1997 President’s Award from the Institute for Operations Research and the Management Sciences (INFORMS) for his "contributions to the welfare of society through quantitative analysis of governmental policy problems."

Pieter Bloemen is the Chief Strategic Officer of the Dutch Delta Programme. He is responsible for the formulation of the core values of the Delta Programme, for the development and application of Adaptive Delta Management and of the Comparison Scheme that was used for the selection of the preferred regional strategies. He led the Strategic Environmental Assessment of the Deltadecisions and preferred regional strategies that are presented in “Deltaprogramme 2015”, and presently works on the development of a monitoring and evaluation system that matches the adaptive approach of the Delta Programme. Bloemen was the program leader of the National Program on Climate Adaptation and Spatial Planning (ARK Program) that developed the first National Adaptation Strategy of the Netherlands in 2007. He was advisor spatial planning and climate adaptation to His Royal Highness Willem Alexander and member of the quarter-making team of the Delta Programme. Before joining the national government in 2000, he worked, from 1986 onward, at the international consultancy company IWACO. At IWACO Bloemen worked three years in West Africa (geophysics for urban water supply). In the Netherlands he worked on groundwater modeling, environmental impact assessment and mediation, and was head of the department of Water and Spatial Planning at the Head Office in Rotterdam. He is Visiting Researcher at Unesco-IHE in Delft (Chair Group Flood Resilience) since January 2015, and is now working on a PhD on the governance of the adaptive approach.

Steven W. Popper (RAND Corporation) is a RAND Senior Economist and professor of science and technology policy in the Pardee RAND Graduate School. His work on macro transitions led to an invitation by President Vaclav Havel to advise the government of Czechoslovakia, participation in an OECD delegation on the first foreign visit to one of the secret cities of the former Soviet Union, and consultation to the World Bank on issues of industrial restructuring in Hungary and in Mexico. His work on micro-level transition focuses on innovation. From 1996 to 2001 he was the Associate Director of the Science and Technology Policy Institute, providing analytic support to the White House Office of Science and Technology Policy and other executive branch agencies. He has taught planning under deep uncertainty at the Pardee RAND Graduate School, the India School of Business, and the Shanghai Climate Institute. He is co-developer of the Robust Decision Making (RDM) approach. He is an elected a Fellow of the American Association for the Advancement of Science, served as chair of the AAAS Industrial Science and Technology section and is the founding chair for education and training of the Society for Decision Making under Deep Uncertainty.