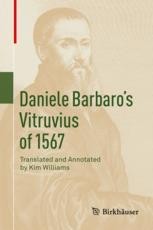 This is the first-ever English translation of Daniele Barbaro’s 1567 Italian translation of and commentary on Vitruvius’s Ten Books of Architecture, an encyclopaedic treatment of science and technology whose influence extended far beyond its day. Intended to both interpret and expand upon the Vitruvian text, Barbaro’s erudite commentary reflects his Aristotelian approach, particularly his fascination with the relationship between science and the arts. This treatise offers a window onto the architectural ideals of the 1500s, as well as then-current notions of philosophy, mathematics, music, astronomy, mechanics, and more. The text is accompanied by illustrations by the Renaissance architect Andrea Palladio and his contemporaries. Palladio’s own Four Books on Architecture, published in 1570, was just one of many treatises on architecture that was inspired by the ideas contained here.

An overview of Daniele Barbaro’s thinking is presented in a foreword by Branko Mitrovic´. The collocation of Barbaro’s treatise between those of Alberti and Palladio is addressed in a foreword by Robert Tavernor. Kim Williams provides a translator’s note to orient the reader. The text of the translation is cross-referenced to both Barbaro's 1567 publication and standard divisions of Vitruvius. The volume includes a detailed index of subjects and an index of proper names.

Kim Williams is an independent scholar and publisher. She is the founder and editor-in-chief of the Nexus Network Journal for architecture and mathematics (Basel: Birkhäuser, 1999-present), and director of the biennial conference series ‘Nexus: Relationships Between Architecture and Mathematics’ (1996-present). She is author of Italian Pavements: Patterns in Space (Anchorage Press, 1997) and The Villas of Palladio (Princeton Architectural Press, 2003). Together with Lionel March and Stephen R. Wassell she has published the translation/commentaries On Ratio and Proportion by Silvio Belli (Kim Williams Books, 2003), and The Mathematical Works of Leon Battista Alberti (Birkhäuser, 2010). Her works as editor include Two Cultures: Essays in Honour of David Speiser (Birkhäuser, 2006), Crossroads: History of Science, History of Art. Essays by David Speiser, vol. II (Birkhäuser, 2011) and, with Michael J. Ostwald, the two-volume Architecture and Mathematics from Antiquity to the Future (Birkhäuser, 2015). She is the editor of the Birkhäuser book series ‘Mathematics and the Built Environment’.

Branko Mitrović (Foreword) is a professor of architectural history and theory at Norges Teknisk-Naturvitenskapelige Universitet in Trondheim, Norway. He received his doctorates in architecture and philosophy and has been a recipient of the Humboldt Research Award. He is the author (or co-author) of seven books, including Learning from Palladio (W. W. Norton, 2004) and Philosophy for Architecture (Princeton Architectural Press, 2011), and Vignola’s Canon of the Five Orders of Architecture (Acanthus Press, 2011). He has published extensively on Renaissance architectural theory.

Robert Tavernor (Foreword) is emeritus professor of Architecture and Urban Design at the London School of Economics (LSE) and a consultant architect. He contributed to recent English translations of Vitruvius (On Architecture, Richard Schofield, trans., Penguin Classics, 2009), Alberti (On the Art of Building in Ten Books, Joseph Rykwert, Neil Leach and Robert Tavernor, trans., MIT Press, 1988) and Palladio (The Four Books of Architecture, Robert Tavernor and Richard Schofield, trans., MIT Press, 1997). He is also the author of several monographs, including On Alberti and the Art of Building (Yale University Press, 1998) and Palladio and Palladianism (Thames and Hudson, 1991).