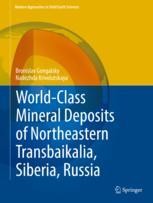 This book describes for the first time the complexity of the Northeastern Transbaikalia province of Russia. This province is one of the largest Early Proterozoic metallogenic provinces on Earth. It comprises three extra large deposits: Cu-sandstones Udokan, Fe-Ti-V and Cu-PGE Chiney, and REE Katugin. This book is a research study and includes geological, mineralogical, and geochemical data obtained by the authors from 30 field trips in the region, using XRF, ICP-MS, La-ICP-MS, EPMA, and the study of Sr, Nd, U-Pb isotopes in rocks and minerals. It demonstrates the complicated origin of Cu deposits comprising 50 Mt copper concentrated in sedimentary and magmatic rocks in this area.

Bronislav Gongalsky has been working in Transbaikalia since 1969 after graduating from Kiev Geological Prospecting College. He was a geologist of the Sosnovsky Uranium Expedition. He graduated from Moscow Geological Institute in 1973 and received PhD diploma performed on the topic “Petrogenesis of Paleozoic granites of Eastern Transbaikalia”. In 1982-1995 he was a head of the Laboratory of Geology at the Institute of Natural Resources of the Siberian Branch of Russian Academy of Sciences (Chita city).The main objects of study are ore deposits of Transbaikalia including Au-quartz deposits (Ithaka, Ukonik, Kluchevskoe, Aleksandrovskoe), Cu-sandstone (Udokan, Unkur), and Cu-Ni deposits (Chiney, Luktur), and currently he works on Fe-Ti-V and PGE-Cu-Ni deposits of different areas. .  B.Gongalsky defended the Doctor thesis in 2012, and got a status of Doctor of geology-mineralogy sciences. At the moment, he is a Leader Researcher at the Institute of Geology of Ore deposits, petrography, mineralogy and geochemistry of the Russian Academy of Sciences, Moscow. Bronislav Gongalsky was awarded by Special Mark of Russian Governement "Excellence in mineral exploration" (2006). He is author of 3 books,  4 book chapters, and many articles in international journals.

Nadezhda Krivolutskaya graduated from Moscow State University as an economic geologist . She has been working at different institutes of the Russian Academy of Sciences : at the Institute of Natural Resources of Siberian Branch of RAS (Chita, before 1994), Institute of Geology of Ore deposits, Petrography, Mineralogy and Geochemistry (Moscow, 1994 -2001), and Vernadsky Institute of Geochemistry and Analytical Chemistry (Moscow, 2002 – present time). N. Krivolutskaya studies  ore deposits of different genetic types (Au-quartz deposits , Cu-sandstone  and Cu-Ni –PGE, mostly of the Noril’sk area).  She defended a PhD thesis entitled “Geology and origin of Cu ores of the Chiney Massif” in 1989, and Doctor thesis “Evolution of trap magmatism and Cu-Ni-PGE deposits of the Noril’sk area” in 2012. She was awarded by the Special Price of  Russian Academy of Sciences for her study of ore deposits of Eastern Siberia in 2015 . At the moment, she is a Leader Researcher at Vernadsky Institute of Geochemistry and Analytical Chemistry of  Russian Academy of Sciences, Moscow. She published 5 books, 3 book chapters, and many articles.
Show all