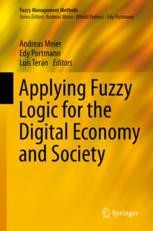 Applying Fuzzy Logic for the Digital Economy and Society

This edited book presents the state-of-the-art of applying fuzzy logic to managerial decision-making processes in areas such as fuzzy-based portfolio management, recommender systems, performance assessment and risk analysis, among others. Presenting the latest research, with a strong focus on applications and case studies, it is a valuable resource for researchers, practitioners, project leaders and managers wanting to apply or improve their fuzzy-based skills.

Andreas Meier is a professor of computer science at the faculty of economics and social sciences of the University of Fribourg/Switzerland. His research areas include eBusiness, eGovernment, and Information Management. After music studies in Vienna, he graduated in mathematics at the Swiss Federal Institute of Technology (ETH) in Zurich. He holds a PhD and a habilitation degree at the Institute for Computer Science of the ETH. He worked for the IBM Research Lab in California, was a systems engineer at IBM Switzerland, a director at Swiss Bank Cooperation and an executive member of the CSS insurance company.Edy Portmann is the Swiss Post Professor of Computer Science at the University of Fribourg, Switzerland. Focusing on user experiences, with the support of network industries as Swiss Post, the goal of Edys professorship is to advance cognitive computing research by adhering to soft computing methods, and to practically apply them in different fields. A focus point, thus, is the enhancement of smart to cognitive cities through improved interaction and learning between citizens and city systems; another one the integration of computing with words and perceptions with cognitive systems to enhance answer-finding and decision-making. Further focus points are knowledge aggregation, automation, representation and reasoning with fuzzy cognitive maps and ontologies as well as big data analytics and management (e.g. using fuzzy methods and systems).

Luis Terán (1979) is currently working as assistant doctor and lecturer at the Information Systems Research Group, University of Fribourg, Switzerland and he is a full professor at Universidad de Las Fuerzas Armadas (ESPE), Ecuador. He earned a Ph.D. in computer science at the University of Fribourg (Information Systems Research Group). In 2009, he finished a M.Sc. in communication systems from the Federal Institute of Technology (EPFL), Lausanne, Switzerland. In 2004, he received a B.Sc. in electronics and telecommunications from Escuela Politécnica Nacional, Quito, Ecuador. His research interests include eGovernment, eParticipation, eCollaboration, eDemocracy, eElection, eVoting, eCommunities, ePassports, recommender systems, and fuzzy classification. He is currently a vice-chair for the IEEE e-Government Special Technical Community, program chair and main organizer for the International Conference on eDemocracy and eGovernment (ICEDEG), guest editor at IEEE Transactions on Emerging Topics in Computing, and distinguished exhibitor at IEEE Ecuador Section.
Show all