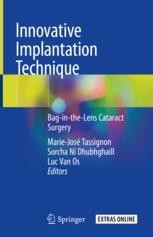 This book provides a complete overview of the bag-in-the-lens implantation technique written by the pioneering force herself. The technique first developed for the adults and later for paediatrics has had overwhelmingly positive outcomes in reduction of posterior capsular opacification and stability. Nowadays, it is used as a primary approach in all patients with cataract. The initial version of the bag-in-the-lens implant is a monofocal spherical hydrophilic intraocular lens comprised of a 5mm bi-convex optic with two elliptical plane haptics. Bag-in-the-Lens Cataract Surgery guides through the steps required to achieve successful implantation in a concise and highly illustrated format to portray how to effectively perform this surgery. The toric version was launched in 2009 and the diffractive version is on its way.

New and experienced ophthalmic surgeons will find this guide to be an indispensable resource for utilizing this technique to successfully treat adult and paediatric cataract patients in their daily clinical practice.

As an ophthalmic surgeon, Prof Tassignon is dedicated to patients from all age ranges. In 2004 and 2008 she operated on King Albert II of Belgium successfully for a cataract in respectively his right and left eye. She used her patented technique, Bag-in-the Lens implantation that avoids posterior capsule opacity (which is the main complication after cataract surgery).

Sorcha Ni Dhubhghaill received her undergraduate degree and PhD from the Trinity College Dublin before her residency training in the Royal Victoria Eye and Ear Hospital and St Vincent’s Hospital in Dublin. During her training she was awarded the Duke Elder prize for ophthalmology, the Edna Walls Research medal for ophthalmology. She is currently a consultant cataract and cornea surgeon in both the University Hospital of Antwerp and the Netherlands Institute for Innovative Ophthalmic Surgery and is also the Principal Investigator for a Horizon 2020 grant in limbal stem cell therapy. Her current research focus is Bag-in-the-lens cataract surgery and corneal stem cells and endothelial transplantations.

Luc Van Os, MD, has been consultant surgeon in the Antwerp University Hospital since 2013  and trained in the same center. His main focus areas are uveitis, cataract, and pediatric cataract. He has been performing bag-in-the-lens cataract surgery since the very beginning of his surgical career, thus considering this technique as a standard technique for intraocular lens implantation in cataract treatment.