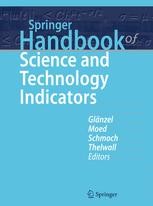 This handbook presents the state of the art of quantitative methods and models to understand and assess the science and technology system. Focusing on various aspects of the development and application of indicators derived from data on scholarly publications, patents and electronic communications, the individual chapters, written by leading experts, discuss theoretical and methodological issues, illustrate applications, highlight their policy context and relevance, and point to future research directions.

A substantial portion of the book is dedicated to detailed descriptions and analyses of data sources, presenting both traditional and advanced approaches. It addresses the main bibliographic metrics and indexes, such as the journal impact factor and the h-index, as well as altmetric and webometric indicators and science mapping techniques on different levels of aggregation and in the context of their value for the assessment of research performance as well as their impact on research policy and society. It also presents and critically discusses various national research evaluation systems.

Complementing the sections reflecting on the science system, the technology section includes multiple chapters that explain different aspects of patent statistics, patent classification and database search methods to retrieve patent-related information. In addition, it examines the relevance of trademarks and standards as additional technological indicators.

The Springer Handbook of Science and Technology Indicators is an invaluable resource for practitioners, scientists and policy makers wanting a systematic and thorough analysis of the potential and limitations of the various approaches to assess research and research performance.

Wolfgang Glänzel is Director of the Centre for R&D Monitoring (ECOOM) and full Professor at KU Leuven, Belgium. He worked in several bibliometric projects above all for the European Commission and several governments. Wolfgang Glänzel is Editor-in-Chief of the international journal Scientometrics, Academic Editor of the journal PLoS One and Secretary-Treasurer of the International Society for Scientometrics and Informetrics (ISSI). He has published in probability theory and mathematical statistics, computer science and various topics in quantitative science studies, scientometrics and informetrics. His main topics of research are the development and application of bibliometric indicators to various levels of aggregation, detection and analysis of cognitive structures of scientific research, subject delineation and classification and mathematical models for the processes of scholarly communication. In 1999 he received the international Derek deSolla Price Award for outstanding contributions to the quantitative studies of science.

Henk F. Moed was a senior staff member and a full professor of research assessment methodologies at the Centre for Science and Technology Studies (CWTS) at Leiden University, The Netherlands, between 1981 and 2010. He obtained a Ph.D. degree in Science Studies at the University of Leiden in 1989. He has been active in numerous research areas, including the creation of bibliometric databases from raw data from Thomson Scientific’s Web of Science and Elsevier’s Scopus, analysis of inaccuracies in citation matching, assessment of the potentialities and pitfalls of journal impact factors, the development and application of science indicators for the measurement of research performance, multi-dimensional assessment of research impact and the potential of altmetrics. He is currently an independent scientific advisor, and visiting professor at the Sapienza University of Rome.

Ulrich Schmoch obtained a diploma in mechanical engineering in 1977 and a Ph.D. degree in social sciences in 1983. Between 1983 and 1985 he worked at the office of a patent attorney. Since 1986, he is at the Fraunhofer Institute for Systems and Innovation Research, Karlsruhe, Germany, and held the position of deputy head of department and head of department for many years. He was visiting fellow at the University of Stellenbosch, South Africa, in 2011, and was delegated to the University of Speyer, Germany, as head of a study course on science management between 2012 and 2014. At Fraunhofer, he conducted several dozens of research projects on behalf of diverse national governments, the European Commission, the OECD, the WIPO, various foundations and enterprises. His special research areas are all kinds of innovation indicators and their combination, in particular patent, publication, trade mark, foreign trade and production indicators.

Mike Thelwall is Professor of Information Science and leader of the Statistical Cybermetrics Research Group at the University of Wolverhampton, UK, which he joined in 1989. His PhD was in Pure Mathematics from the University of Lancaster. His current research field includes identifying and analysing web phenomena using quantitative-led research methods, primarily link analysis and sentiment analysis, and has pioneered an information science approach to link analysis. Mike has developed a wide range of tools for gathering and analysing web data, including hyperlink analysis, sentiment analysis and content analysis for Twitter, YouTube, MySpace, blogs and the web in general. He was a member of the UK’s independent review of the role of metrics in research assessment (2014-15) and is a member of the UK Forum for Responsible Research Metrics.